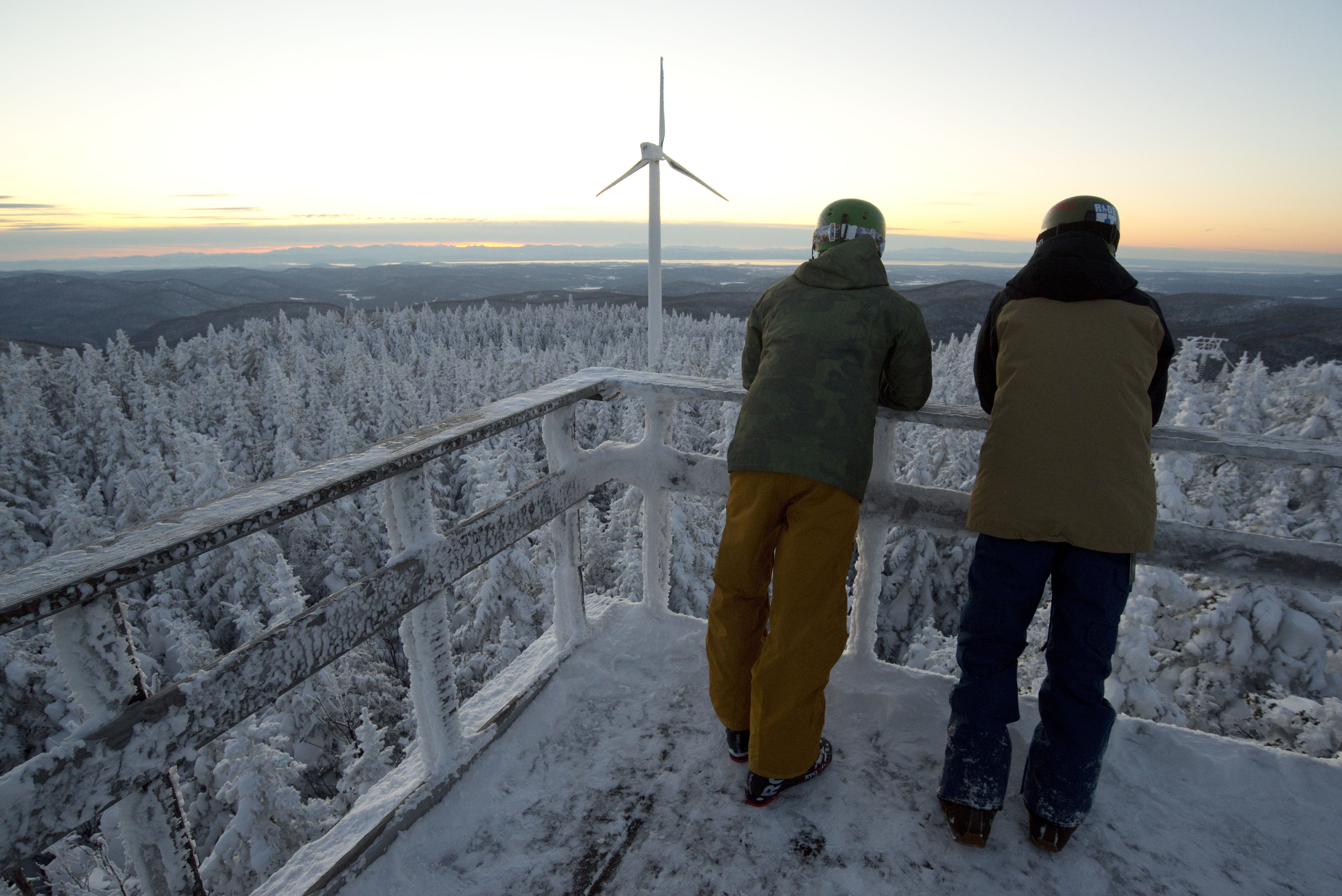 Bromley puts the “Green” in the Green Mountains with their strong commitment to change. Since 2000, Bromley has adopted almost every available energy efficiency technology in snowmaking. They have also completed a total of 27 projects resort-wide in collaboration with Efficiency Vermont - winning us their Energy Leadership Award in 2017. Efficiency efforts continued this season with an upgraded snowmaking pump-house system with new, state-of-the-art VFD (Variable Frequency Drive) motors. Bromley didn’t stop just on the slopes - they will also continue their quest to decrease food trash in the base lodge by adding staff to the composting station. These employees will work to sort and remove all compostable food waste.

Killington is the home of Cow Power, with over 1 million kilowatt hours annually coming from Vermont dairy cows, specifically their waste. In addition to supporting local farms and harvesting methane gas, Killington continues to invest heavily in solar power, including onsite AllEarth Solar tracker and four offsite solar farms. These two projects produce enough solar energy to run all the lifts at Killington Resort and Pico Mountain for the entire season, helping to keep one of Vermont’s greenest resorts sustainable.

Mad River Glen strives to maintain the current infrastructure, minimize environmental impact and stay true to the Co-op’s vision of maintaining the area’s unique character. The philosophy is to protect and preserve the unique ski experience, putting an emphasis on the mountain, not development. The philosophy can be traced to Mad River’s founder Roland Palmedo who believed that “…a ski area is not just a place of business, a mountain amusement park, as it were. Instead it is a winter community whose members, both skiers and area personnel are dedicated to the enjoyment of the sport.”

Stratton is dedicated to year-round environmental efficiency in every aspect of operations. With construction of the new Snow Bowl lift, Stratton has reclaimed areas back to their natural state, adding acreage to the 1,500 already protected in conservation easements. Stratton will now offer straws by request only and feature a bamboo option instead of plastic. This season, retail shops will be switching to bags made of 100 percent recycled paper. Stratton’s indoor tennis courts have been outfitted with 47 new LED light fixtures complete with motion sensors, improving lighting for players as well as saving 18,900kWH and 18,500 pounds of carbon annually. In January, Stratton was recognized by the Environmental Protection Agency for composting and recycling, which has diverted over 50 tons of waste since 2014. Stratton is also the only organization in Vermont to be recognized as an EPA WasteWise partner and one of three to have joined the NSAA Climate Challenge.

This year energy consumption is expected to be much lower compared to past years as a result of the investment in automation upgrades to the snowmaking system, along with ongoing initiatives to improve the resort facilities and operations.

Okemo continues to reduce, reuse and recycle. Recent upgrades in snowmaking have made Okemo more efficient at making snow – resulting in better coverage on the trails. Okemo’s newest Prinoth grooming machines are equipped with a Caterpillar 400 horsepower, tier 4 engine that meets all the new federal emissions standards with more fuel efficiency and an increase in horsepower compared to the previous model. Okemo continues to focus on reduced-power-consumption and energy-efficiency projects and is working closely with Efficiency Vermont. Okemo was recognized recently by Efficiency Vermont for continuous engagement and persistent commitment from its management team. Six projects were completed between 2017 and 2018 with an estimated annual savings of $212,000 (Jackson Gore HVAC controls, refrigeration and LED upgrades in multiple buildings). 32 projects have been completed since 2001.

Since the 1970’s, Smugglers’ has been a leader in environmental stewardship. Operating a mountainside village of this scale in addition to 1,200 acres of alpine terrain requires constant attention to and implementation of sustainable practices. Smugglers’ maintains the Five Star status in energy efficiency in residential construction, wildlife, and habitat protection with ongoing tracking of both the Bicknell’s thrush and black bear populations, and operation of the Living Machine treatment facility using natural biological processes to treat a significant portion of the Resort’s wastewater. Through extensive reuse, recycle, and composting efforts in place, lunch service for the Resort’s daily ski and snowboard children’s camp programs is trash-free. On the mountain, the snowmaking system has reduced diesel consumption by two thirds thanks to a 100% upgrade in the snow gun fleet. Smugglers’ is the first resort in Vermont recognized as an Environmental Leader by the Vermont Business Environmental Partnership program, reflecting Smugglers’ comprehensive environmental management program focused on compliance and minimization of environmental impacts. smuggs.com/environment

New ownership has invested in a more sustainable model for Magic which includes investment in equipment and practices which will reduce the ski area’s carbon footprint while making Magic more efficient to operate over the long-term. Magic has invested in over 50 new energy efficient snowmaking guns and is the only ski area 100% powered with variable frequency drives for its snowmaking pumps reducing energy consumption for every inch of blown snow. Magic reduced its energy bill by 50% while making more snow last year and further improvements to snowmaking pipe and a switch from primarily diesel compressors to electric compressors last season has further reduced its energy consumption and expense, as well as resulted in cleaner air. The lodge was also re-insulated with the latest spray foam technology which further reduces heat loss. LED lights have replaced older lighting and air vents have been relocated to reduce further loss of heat in the cafeteria area. Part of being in a local community means being a responsible member of that community; keeping Vermont green and clean is part of our collective mission.

With the opening of our brand new $22 million Carinthia Base Lodge, Mount Snow is saying goodbye to single use plastic in its two new bars, sit-down restaurant, and multi-station made-to-order dining area. This new lodge will serve as a test site for this new initiative that we plan on rolling out to the rest of the resort in the coming years. Back up on the mountain, thanks to our ongoing partnership with Efficiency Vermont, Mount Snow has been able to upgrade its entire fleet of 948 snow guns to 100% low-e technology, yielding the opportunity to make more snow than ever before, all while using less energy. It’s a win-win!

Sugarbush has been part of the NSAA Climate Challenge since 2011, a voluntary program aimed at decreasing its carbon footprint. New this season, Sugarbush has replaced plastic straws with paper straws.  Sugarbush is also in a long-term partnership with Green Lantern Capital of Waterbury, to support the development of 2.5 megawatts of clean, renewable solar energy. As of early 2017, five 500-kilowatt arrays - in Poultney, Brandon, New Haven, Guilford, and Wells River - are fully operational and plugged into Green Mountain Power’s electrical grid. In addition, Sugarbush also has a number of other green initiatives including energy-efficient snowmaking, composting/recycling policy, Tesla charging stations and a bio-diesel policy for off-road vehicles. The resort also works closely with the Mad Bus, the Mad River Valley’s free seasonal bus service.

Stay in the Snow!
Sign up to receive Ski Vermont emails and powder alerts.
Sign Up
Travel Vermont!
Let us help you get here with driving, flying and train travel tips.
Learn More