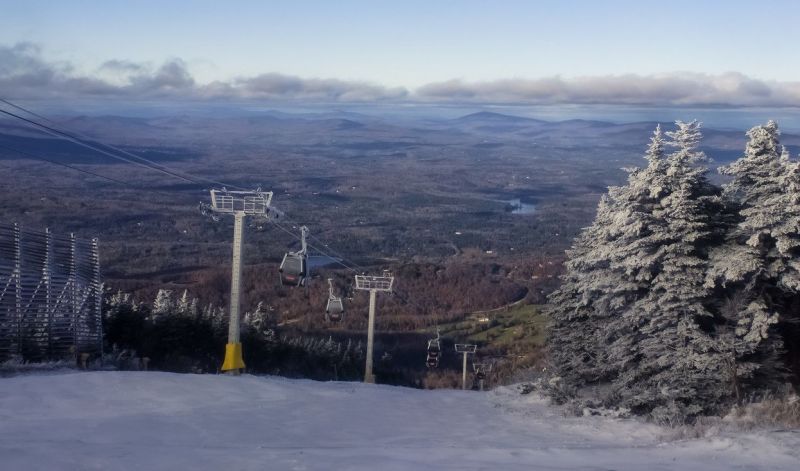 The snow guns stand at the ready, set to blast Vermont’s ski and snowboard season into full swing.

Entering the prime date range for ski areas to open in Vermont, most have a day circled on their calendars for spinning their first chairs of the season.

Okemo Mountain Resort is projecting a Nov. 16 opening day. Director of Public Relations Bonnie MacPherson said the resort is all-systems-go for snowmaking as soon as the mercury dips a bit.

“Word from Okemo Snowmaking Manager Ray Kennedy is that the system is charged, tested and ready to go,” said MacPherson, adding that Okemo has the capabilities to “make enough snow to have a skiable depth on a trail in about 24 hours.

“Ideally, we also like to give it some time to set up and run a groomer over it a couple of times, so we just need a few chilly days to get this season started,” she said.

Stowe Mountain Resort is also eyeing a Nov. 16 opening, thanks to the 83 percent snowmaking coverage on its 485 skiable acres.

Sugarbush Resort has plans to begin snowmaking early next week, with a planned opening date of Nov. 17 - the same day as The Big Kicker, its winter kickoff event in conjunction with Mad River Glen at American Flatbread in Waitsfield.

Lifts at a number of other Vermont resorts and ski areas should spin to life within the following week; Stratton Mountain Resort has marked Nov. 21 for opening day, and Smugglers’ Notch Resort, Magic Mountain, Bromley Mountain and Jay Peak Resort have all targeted Nov. 23.

“Looks like the temps will drop significantly after this week, and our team is poised and ready to fully assault the mountain with a blanket of white,” said Michael Chait, Public Relations Director at Smugglers’ Notch.

The season is already off to a historically fast start. Killington Resort first spun its lifts on Oct. 19 – a full three weeks ahead of its opening day last season and tied with Maine’s Sunday River for earliest opening in the East. Mount Snow Resort welcomed skiers and snowboarders the following weekend for the earliest opening in its 64-year history.

The first three weeks of November are traditionally the sweet spot for Vermont ski areas opening. Last year, nine of the state’s alpine resorts opened between Nov. 8 and Thanksgiving weekend.