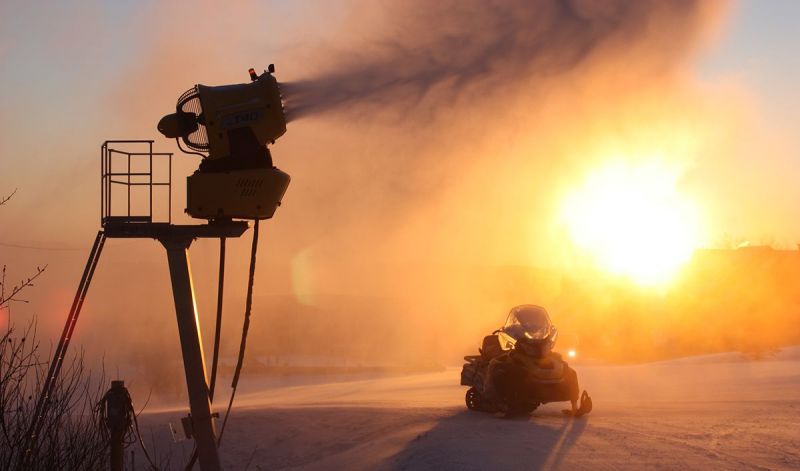 Sustained temperatures ideal for snowmaking allowed Vermont ski areas to build up a stellar snowpack well ahead of the holiday season.

“We saw this storm coming, and we were ready for it,” said Jamie Storrs, director of communications for Mount Snow Resort. “The bounce-back from this weather event is going to be very fast, thanks to our snowmaking capabilities.”

Vermont ski areas have invested more than $68 million in snowmaking upgrades over the past five years, taking what was already the industry standard for man-made snow to unprecedented heights of efficiency and capability.

“Our snowmakers are able to fire up their systems at the drop of a hat,” said Michael Chait, Public Relations Director at Smugglers’ Notch Resort. “Smugglers’ teams are closely monitoring temperatures and will cover the trails in a fresh blanket of white just as soon as temps allow us to do so.”

The forecast calls for the mercury to drop well below freezing by Saturday evening, at which time snow guns will roar back to life all over the state. Snow showers are expected overnight Saturday and into Sunday, followed by more snowfall on Christmas Eve.

Storrs said the mountain operations team at Mount Snow just completed the longest sustained snowmaking period in the resort’s 64-year history, blowing snow for a whopping 218 consecutive hours from Dec. 4-13. Part of that production was a sort of “preemptive strike” against a weather event such as Friday’s.

“We had good temperatures, so we decided to keep loading up,” Storrs said. “We stockpiled snow in whales (huge piles) all over the mountain, so once this weather lets up we’ll push those out over the trails and then blow more snow on top of them.”

Recent advancements in snowmaking technology have revolutionized the speed with which a ski area can resurface its terrain. Killington Resort – which put a significant portion of its recent $25 million capital improvement project toward snowmaking upgrades – can literally create a man-made blizzard.

Vermont ski areas’ commitment to providing the best possible conditions is evident in their widespread upgrades in recent seasons. Five years ago, Okemo Mountain Resort launched a multi-million-dollar snowmaking improvement plan called Operation Snowburst – which included pump and pipeline upgrades as well as the addition of more than 100 new, energy-efficient tower guns to bring its arsenal to 1,300 snow guns mountain-wide.

“Okemo is a skier’s best bet when weather conditions are favorable and an even better bet when weather challenges occur,” said Bonnie MacPherson, director of public relations. “Okemo’s increased water-pumping capacity - 7,000 to 9,000 gallons of water per minute under optimal snowmaking conditions - allows Okemo to recover quickly when Mother Nature gets temperamental.”

Sugarbush Resort and Stowe Mountain Resort have spent nearly $15 million between them in snowmaking improvements in the last five years.

“While we all love when Mother Nature delivers, investments in snowmaking continue to help provide insurance against poor weather,” said John Bleh, communications supervisor at Sugarbush.

“For the first time, snow production on ‘The Face,’ the mountain’s signature trail, and the ski and snowboard learning center, will be fully automated,” said Tim Reiter, general manager at Suicide Six. “The snow guns replaced by the new technology have been reallocated to other areas of the mountain to phase out aged snow guns and ultimately create higher quality snow and shorter production times.”

Record early-season snowfall and sustained, optimal temperatures for snowmaking have helped set Vermont ski areas up to more easily overcome challenges such as Friday’s. Following a number of historic early openings, skiers and snowboarders have enjoyed amounts of open terrain and depth of snowpack never before seen in the Green Mountains’ recorded history.

“We’ve had perfect snowmaking weather at night with temps in the single digits and then prime ski weather during the day,” said JJ Toland, director of communications at Jay Peak Resort. “Those temps have allowed us to put snow in the bank.

“It’s been this sort of perfect storm, and it’s setting us up to have a historic holiday season.”

For the latest conditions at Vermont ski areas, visit https://skivermont.com/conditions.