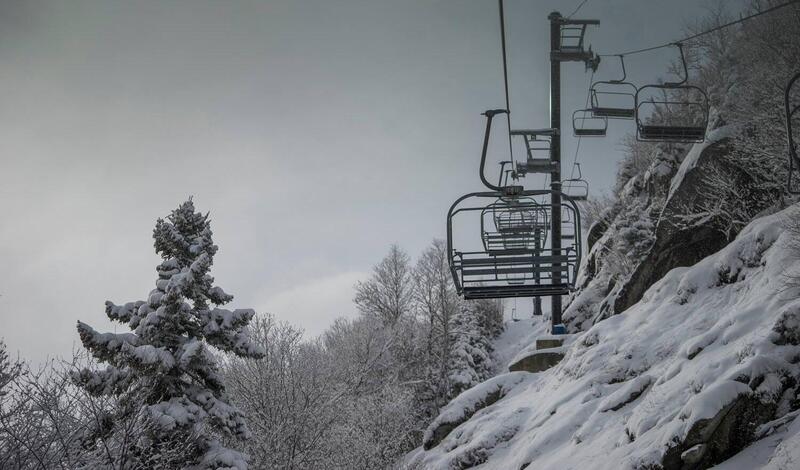 The Middlebury Snow Bowl is proud to have been the first Carbon Neutral Ski area and continues to reduce its carbon footprint. (Ski Vermont photo)

A recent Vermont Ski Areas Energy Savings Impact Report from Efficiency Vermont revealed that Vermont ski areas have completed 668 projects since 2000, including low-e snowguns, compressed air right sizing, lift terminal heater controls, thermal shells and many other systems and improvements. The anticipated lifetime savings of these projects is more than 989M kilowatt hours of electricity - equivalent to the power used by 400K homes annually - and 1.77B pounds of CO2 equivalent. The avoided lifetime costs to the Vermont ski industry are estimated at more than $175M.

Middlebury Snow Bowl
The Middlebury Snow Bowl is proud to have been the first Carbon Neutral Ski area and continues to reduce its carbon footprint.  Last season’s switch from Diesel to Electric Compressors has been completed and this will be the first full season of operation with the more efficient system.  Additional snow gun and pipe upgrades are in process to make the process even better.

Stowe Mountain Resort
Vail Resorts, owners of both Stowe and Okemo, has been awarded the 2019 Golden Eagle Award for Environmental Excellence by the National Ski Areas Association (NSAA) for its bold environmental sustainability program, Commitment to Zero. The annual Golden Eagle Awards, which were presented at the NSAA National Convention in San Diego last May, are the highest honors given for environmental performance in the ski industry. Vail Resorts announced Commitment to Zero in July 2017. The three pillars of this commitment include (1) zero net emissions by 2030 with 50 percent progress toward this goal by 2025, (2) zero waste to landfill by 2030 and increasing waste diversion to 50 percent by the end of 2020, and (3) zero net operating impact to forests and habitat.

Jay Peak Resort
Because of its selection into Vermont’s Energy Savings Account Pilot program, Jay Peak will be able to undertake several efficiency projects, including one to expand and optimize a heat-exchanger system that allows it to capture waste heat from its ice arena and use that energy to heat other resort facilities including its indoor waterpark. It is estimated the projects will reduce the resort’s propane consumption by 100,000 gallons a year and cut its electric bill by close to 300,000 kilowatt hours a year.

Smugglers’ Notch Resort
Since the 1970’s, Smugglers’ Notch has been a leader in environmental stewardship. Operating a mountainside village of this scale in addition to 1,200 acres of alpine terrain requires constant attention to and implementation of sustainable practices. Smugglers’ maintains the Five Star status in energy efficiency in residential construction, wildlife, and habitat protection with ongoing tracking of both the Bicknell’s thrush and black bear populations, and operation of the Living Machine treatment facility using natural biological processes to treat a significant portion of the Resort’s wastewater. Through extensive reuse, recycle, and composting efforts in place, lunch service for the Resort’s daily ski and snowboard children’s camp programs is nearly trash-free. On the mountain, the snowmaking system has reduced diesel consumption by two thirds thanks to a 100% upgrade in the snow gun fleet. Smugglers’ is the first resort in Vermont recognized as an Environmental Leader by the Vermont Business Environmental Partnership program, reflecting Smugglers’ comprehensive environmental management program focused on compliance and minimization of environmental impacts.smuggs.com/environment

Bromley Mountain
Bromley Mountain put the “Green” in the Green Mountains with its strong commitment to change. Since 2000, Bromley has adopted almost every available energy efficiency technology in snowmaking. Bromley has also completed a total of 27 projects resort-wide in collaboration with Efficiency Vermont - winning their Energy Leadership Award in 2017. Efficiency efforts continued last season with an upgraded snowmaking pump-house system with state-of-the-art VFD (Variable Frequency Drive) motors. The VFD motors allow Bromley to adjust the snowmaking system to the specific Bromley power needs by the day, by the hour – you name it. Add that to the investment over the last few years in snow guns (100% of its snow guns are rated HE), and its system is completely tuned to maximize snowmaking efforts and reduce resource waste. The folks at Bromley love this mountain and this Earth, and are doing their very best to take care of them both.

Sugarbush Resort
Sugarbush aims to be an environmental leader promoting sustainable practices and acknowledges that the resort has environmental impacts. Sugarbush has been part of the NSAA Climate Challenge since 2011, a voluntary program aimed at decreasing its carbon footprint. The resort also recently added all of its dining venues to 1% For The Planet, where 1% of their sales are pledged to environmental causes. Sugarbush is a member of Protect Our Winters, who focuses on educational, activist, and advocacy initiatives for the environment. The resort also commits with a number of other programs including clean water, EV charging stations, plastic straw ban, biodiesel fuel in on-mountain vehicles, waste disposal and recycling, public transportation, green housekeeping, and creating a Safety/Environmental/Wellness Committee that focuses on creating environmental quality enhancements for its guests and employees.

Magic Mountain
New ownership has invested in a more sustainable model for Magic which includes investment in equipment and practices which will reduce the ski area’s carbon footprint while making Magic more efficient to operate over the long-term. Magic has invested in over 70 energy efficient snowmaking guns and is the only ski area 100% powered with variable frequency drives for its snowmaking and pond/brook pumps reducing energy consumption for every inch of blown snow. LED lights continue to replace older lighting, including outside sign lights. Magic is also exploring a major solar project as part of its future.

Stratton Mountain Resort
Stratton Mountain Resort continues its legacy of environmental leadership with new initiatives including installation of bi-fuel LPG systems on five vehicles, which reduces carbon emissions by 50,000 tons a year. Certified compostable paper straws and to-go containers saved approximately 700 pounds of waste;  limiting single-use plastics and non-compostable materials continues throughout food and beverage operations.  Indoor tennis court and pool lights were upgraded to LED fixtures, saving approximately 35,000 kWh of electricity;  additional upgrades are underway across the mountain including Skier Dropoff. Four electric vehicle chargers are being installed. And, a portion of every Ikon Pass sold supports Protect Our Winters, as we educate guests and employees on the impact of climate change.

Bolton Valley Resort
Bolton’s most notable green update for the 2019-20 season is the replacement of its old halogen night-skiing lights with 150 brand new high-efficiency LED lights. This will effectively make the night skiing and riding experience way better with higher visibility while also cutting its energy use by more than half.  Combined with Bolton’s new electric snowmaking compressor that replaced its diesel predecessor, BV will be significantly reducing fuel consumption and operating costs this year, while also improving its guests’ experience.

We'll continue with our existing eco-friendly practices as well: Implementing wind power as much as possible, utilizing high-efficiency HKD snowguns and SMI fan guns, and heating the base lodge with Magnum Countryside pellet stoves. Additionally, all used cooking oil is donated to the Alternative Fuel Foundation. Bolton Valley is also an advocate for composting and recycling, safe snowmelt, environmental towel programs and more.

Mount Snow Resort
Mount Snow’s commitment to green energy continues this year with HKD snowmaking guns for the trails in which snowmaking was added. In addition, the resort is increasing its solar power efforts as well as upgrading lighting equipment around the resort for more efficient overall energy use.

Okemo Mountain Resort
In August 2019, Okemo became one of nine major Vermont employers to participate in a new Efficiency Vermont Pilot program to reduce operating costs and spur innovation in energy management. Participants receive up to 100 percent of their Energy Efficiency Charge back to use for eligible projects and evaluation, measurement, and verification costs. In July 2017, Vail Resorts, Inc. (NYSE: MTN), Okemo’s parent company, announced its Commitment to Zero – a bold pledge to reach a zero net operating footprint by 2030. In November 2018, the company announced a long-term wind energy contract. Additionally, Vail Resorts announced a partnership with Eco-Products to supply all of its North American restaurants with compostable and recycled-content items and eliminate conventional single-use plastics, a process which began during the 2018-19 winter season.

Suicide Six Ski Area
This year, energy consumption at Suicide Six is expected to be much lower compared to past years as a result of the investment in automation upgrades to the snowmaking system, along with ongoing initiatives to improve the resort facilities and operations.

CORRECTION: A previous version of this article incorrectly stated an anticipated lifetime savings of 1.77B tons of CO2 equivalent from efficiency projects at Vermont ski areas since 2000. The correct amount is 1.77B pounds. Ski Vermont apologizes for the error.