The Cream of the Competitive Crop: Vermont Cranks Out World-Class Skiers and Riders 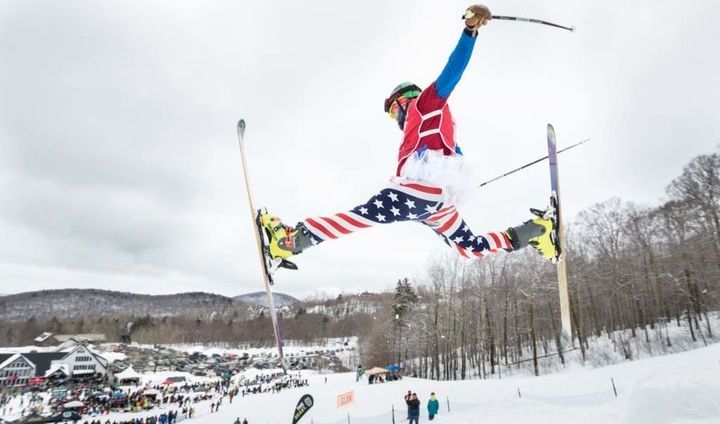 Scan the start list for any world-class competitive ski or snowboard event, and chances are good you’ll find competitors with roots in, or connections to, Vermont. The Green Mountain State’s ski areas and winter sports academies have churned out a virtual who’s-who of elite competitors, many of whom have left an indelible mark on the snow sports history all the way up to the World Cup and Olympic levels.

Buckle your chin strap and prepare to rocket through the racecourse or drop into the halfpipe with the stellar snow sports competitors of the Vermont ski and snowboard scene:

Smugglers’ Notch Resort
Smugglers’ Notch Ski and Snowboard Club (SNSC), headquartered at the base of Smugglers’ Notch Resort’s Sterling Mountain, has been the training ground for the ski careers of Olympians, National Team members, pro ski racers and college athletes since its 1959 founding. SNSC became a not-for-profit organization in 1975, and the club currently offers training and competitive opportunities in alpine skiing, freestyle skiing and snowboarding. The club’s Extreme Ski Challenge, hosted February 29, 2020 and March 1, 2020, is now in its sixth year and attracts a full field of competitors ready to take on some of Smugglers’ gnarliest terrain.www.snscvt.com

Middlebury Snow Bowl
As Middlebury College’s home mountain and training facility, you can watch Division 1 College athletes train and race on a regular basis in a friendly small mountain atmosphere.

Sugarbush Resort
Sugarbush Resort is home to the Green Mountain Valley School (GMVS), a U.S. Ski Team High Performance Training Center. A world-class ski academy, GMVS’s alpine training program produces some of the finest ski racers in the country. GMVS has placed numerous athletes on the US Ski Team since its inception in 1973, many of whom obtained World Cup podium finishes and Olympic medals including Doug Lewis. Ski and snowboard Hall of Famer and Warren Miller film star John Egan is on-staff at Sugarbush and available for private lessons and cat skiing adventures.

Magic Mountain
Magic Mountain has close-knit, dynamic and affordable Alpine Training Center programs for kids age 5-17, offering alpine racing competing in VARA with two great race trails and the best run races in southern Vermont; all-mountain freeride training and competition in IFSA sanctioned events across the state; and a Devo (development program for younger kids age 5-8 as they meet new friends, grow their skiing skills and then decide whether they want to join racing or freeride. With full season weekend coaching, Magic’s children learn the snowsports skills and develop the friendships that last a lifetime https://magicmtn.com/youth-programs/

Killington Resort
Killington Mountain School, in partnership with Killington Resort, has on-mountain training facilities including a four-season bag jump for year-round training near the base of the Superstar trail. Donna Weinbrecht, mogul maven of Killington, won the first Olympic Gold Medal awarded for mogul skiing at the 1992 Albertville Games and has won every accolade in her sport since. Join Weinbrecht for one of her Ski Clinics through the season. Once again, Killington will bring home some of the sport’s finest winter athletes during the 2019 Audi FIS Ski World Cup over Thanksgiving Weekend - expect to see world-class athletes including Mikaela Shiffrin.

Mad River Glen
Mad River Glen tends to attract some pretty accomplished skiers, so it stands to reason that when these folks “go forth and multiply” their progeny tend to be pretty good themselves. Mad River Glen sculpted athletes like Lars and Silas Chickering-Ayers, who have competed on and won at Freeskiing World Tour level. Mad River Glen Race team alumnus Danny Duffy is a member of the US Ski Team and was the 2015 US National Super-G Champion.

Suicide Six Ski Area
Founded in 1932, Woodstock Ski Runners is the oldest ski club in the Northeast with a long-standing mission to instill a life-long passion for on-snow sports among the children of the Woodstock community. WSR’s fun, supportive, and family-friendly environment ensures access to both introductory and competitive programs in alpine, cross country and all mountain categories.