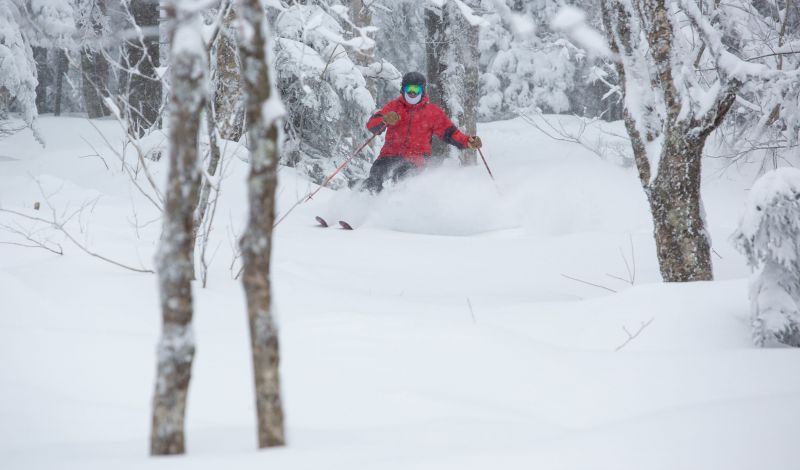 Skier and rider visits at Vermont ski areas totaled 4,178,533 for the 2018-19 season, an increase of more than five percent over the previous season. (Jeb Wallace-Brodeur photo)

MONTPELIER, Vt. (June 5, 2019) – Members, supporters and friends of the Vermont ski and snowboard industry gathered at Jay Peak Resort on June 5-6 for the Vermont Ski Areas Association’s 50th Annual Meeting. Alpine and Cross-Country members, associate members and marketing partners were among those who celebrated what will be remembered as an historic season for Vermont skiing and riding, in which abundant early-season snowfall helped the industry post an increase in business over the 2017-18 season.

Vermont ski areas saw 207K more skier and rider visits this season than last, an increase of 5.2 percent. This season’s 4,178,533 total skier/rider visits were the most since the 2014-15 season and 1.2-percent higher than the 10-year average seen by the state’s ski areas.

Historic early openings with unprecedented amounts of skiable and rideable terrain set the stage for the successful season. Killington Resort first spun its lifts on October 19 – a full three weeks ahead of last year’s opening day and tied for earliest opening in the East. Mount Snow Resort enjoyed the earliest opening in its 64-year history on Oct. 27. Smugglers’ Notch Resort opened Nov. 23 with the most skiable and rideable terrain ever on an opening day – 58 of its 78 total trails. By Dec. 1, the state's percentage of open alpine terrain stood at 65; the average for that date over the previous 13 seasons was just over eight percent.

That strong start was further bolstered by one timely snowstorm after another hitting the Green Mountains:  Winter Storm Bruce dropped two feet on Nov. 25-27; Harper brought more than two feet during the long MLK Weekend; and Maya delivered 14 inches right on time for Presidents' Week. A combination of this snowfall, ever efficient snowmaking and no significant periods of warm weather resulted in very consistent coverage and a higher percentage of terrain open across the state throughout the season.

The Green Mountains remained a winter wonderland straight through the closing bell. March 30 saw 92 percent of terrain open at Vermont ski areas - the highest percentage for that date since the 2012-13 season. Mad River Glen reached its 136th day of operations on April 20, marking the longest season in its 70-year history. Killington's Superstar Quad finally stopped spinning on June 2, its 211th day of the season.

“From early openings with unprecedented amounts of terrain all the way through to a seemingly never-ending spring of soft bumps and goggle tans, it was a great season - historic and unforgettable.”

The Annual Meeting featured Ski Vermont’s overview of the 2018-19 season and the impact of its marketing, public relations and governmental affairs efforts. Its Take 3 Pass and the Fifth Grade Passport programs helped get nearly 3,500 people on snow this season, and the proceeds from those programs once again enabled an annual grant through the Vermont Working Lands Foundation.

The first went to Eric Friedman, who recently retired after 24 seasons as marketing director at Mad River Glen. During Eric’s time at one of the few cooperatively-owned alpine ski areas in the country, MRG has raised more than $7 million over two successful capital campaigns. Eric will continue to promote and support the Mad River Valley as executive director of its Chamber of Commerce.

Rob Megnin, who is retiring as director of sales and marketing at Killington Resort, received the second Industry Achievement Award. With a career spanning several mountain resorts across three states, Rob has played a key role in major events including three World Cups and helped earn numerous national awards for marketing and programs. Rob will continue to share his expertise as a teacher in the Castleton University Killington School for Resort Management.

The third Industry Achievement Award was given to Tracy Taylor, Killington Resort’s retiringbusiness development and special projects manager. Tracy has been blazing new paths at Killington and Pico since 1987 when he arrived right out of college in the first of many positions he would hold at Killington, Travel Industry Marketing Manager. Throughout the years and different responsibilities Tracy held, he brought his passion for the sport of alpine skiing to many through group tours, field sales, and a new international marketing program.

Other awards bestowed at Ski Vermont’s Annual Meeting included an Industry Champion Award to Cabot Creamery – which is celebrating its 100th anniversary this year - for its many years of partnership with Ski Vermont and tremendous support in furthering the Vermont brand. A Friend of the Industry Award went to Rick Spear, former president of Leitner Poma of America, another longtime supporter of the Vermont ski industry.

Ski Vermont (Vermont Ski Areas Association) is a proud ambassador of the thriving winter tourism industry in Vermont, where the legislature has designated skiing and snowboarding as the official state sports. Vermont is not only the #1 ski state in the east and third in the US, but also reigns supreme in snowmaking quality and coverage, variety of terrain and historical impact on the sports of skiing and snowboarding - making it one of the most significant ski and ride destinations in the world. Ski Vermont’s mission is to help create a legislative, economic and social environment in which the state's ski areas can grow and prosper. It serves its 20 Alpine and 30 Nordic member resorts in three major areas: Governmental Affairs, Marketing and Public Affairs.