Late in the season, drawn by the deep April snow, the father-daughter team sought to add one more mountain to their repertoire, setting off on Easter weekend for the Hermitage Club at Haystack in southern Vermont. From the moment they pulled into the Hermitage’s valet parking queue under the portico of the resort's new 80,000 square foot day lodge, they understood this mountain and day lodge experience was going to be different.

Arriving on Easter weekend, Shapera says he didn’t feel fazed when he noticed small groups inside dressed in dapper outfits over their ski boots - men in dark vests over white shirts with ties and women in long skirts and elegant hair styling. Shapera assumed this was de rigeur ski wear in the sumptuous club house with thick beams, three story ceilings, twenty-yard buffet brunch, and wood paneled changing lockers. After all, he’d read the brochure that many arrive from Boston and New York by special Mercedes van service, helicopter and private plane. 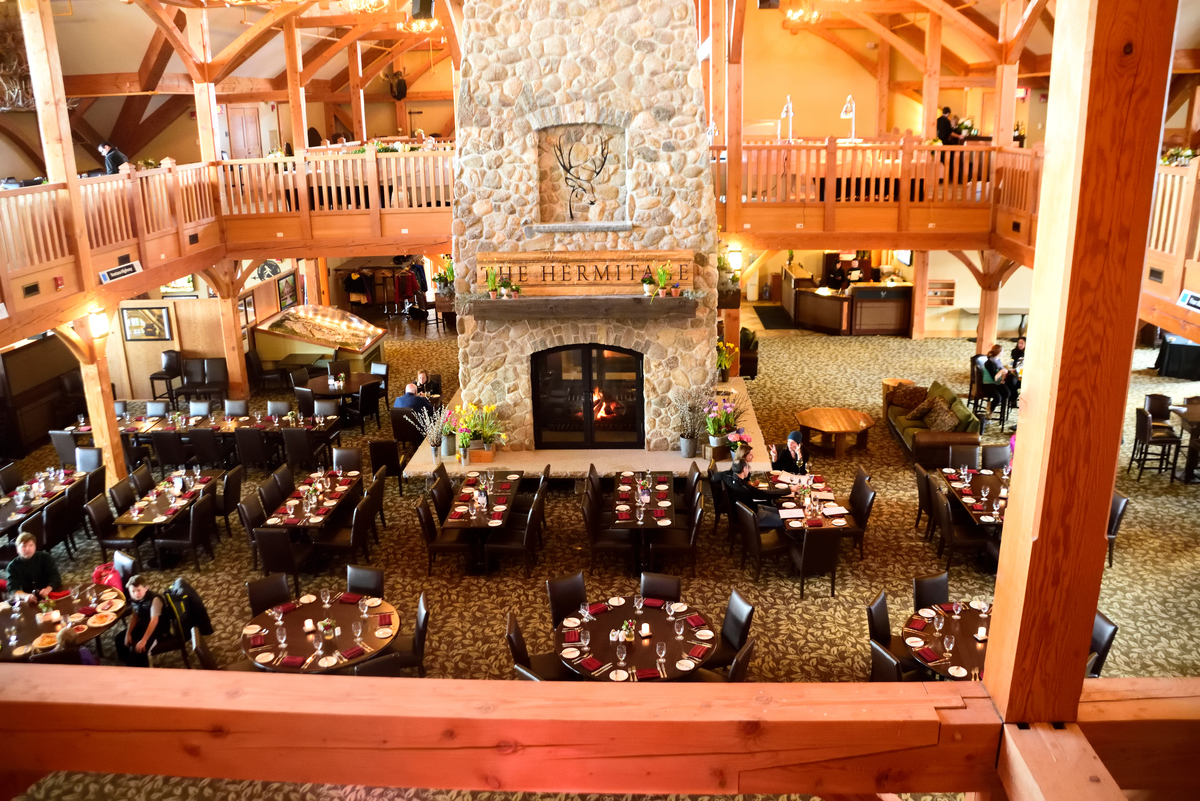 On this April weekend, it seemed only a few of the clubs 500 member families had come. Out on the slopes, as father and daughter rode the nearly empty Barnstormer chair they came to a clearing where several trails converged and noticed a few people sculpting a large colorful heart in the snow from dozens of skis. Nearby, hay bales formed a small seating area with yellow wisteria stalks marking a center isle. They didn’t know what to make of it all and shrugged it off for the rest of the ride. Then, on reaching the top of the lift, they overheard other skiers talking about their plan to ski  to a closed trail that would lead to a wedding ceremony. They learned the bride was Brie Pike-Sprenger, a physical therapist for U.S. alpine champion Mikaela Shiffrin and the U.S. woman’s alpine team. The groom, Justin Beckwith, heads Nordic programs at the Green Mountain Academy, in Warren Vermont. 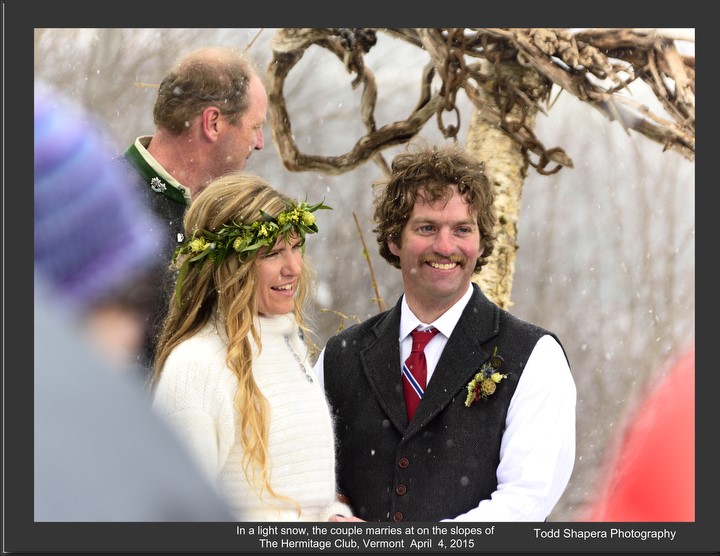 Their wedding party had impressive Vermont ski racing and coaching backgrounds. The officiant, Ben Husaby, was a two-time U.S. Olympic cross-country skier - he flew in from Oregon to preside over the wedding ceremony. After guests skied and boarded to the ceremony, the wedding party arrived in procession one at a time from the slope above - most free heeling. The groom also telemarked, led by his dog, Rafter. Then came the bride, escorted by her father in a dapper jacket and green pants. She sunk into her turns wearing a white sweater jacket, blue ski pants, a floral head wreath, and carrying a bouquet.

On the couple’s wedding blog, they trace their first meeting to their teenage years when attending different ski academies. Their courtship began some time later in college and endured while traveling to ski at various mountains. Their resort venue choice stirred special memories of Haystack's trails from when Brie was growing up.

Since Shapera wasn’t their photographer, after capturing these and other moments, he skied off during the ceremony to enjoy the rest of the day on the mountain with Emma. On another ride back up the Barmstormer chair, they passed over the ceremony at precisely the moment when the officiant pronounced the couple married. A special moment for aerial photos just as family and friends below began clapping and raising their arms in celebration! 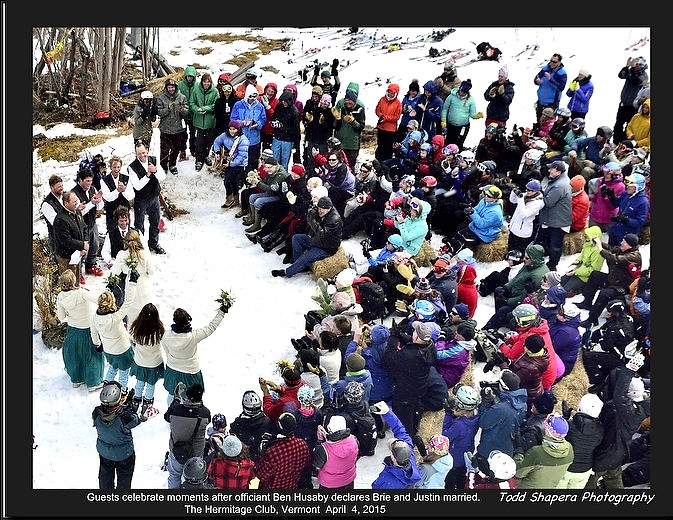 Fittingly, the couple honeymooned by backcountry skiing with Rafter approximately 140 miles from Dover to their home in Warren - much of it on the Catamount Trail - with a few friends accompanying them for segments along the way.