Intrepid Skier Makes Epic Vermont Journey: As told by the First Check In to Win Champ

Ladies and Gentlemen, We Have a Winner!

One dedicated skier logged time on each of Vermont’s 19 slopes with Trace Snow and became the very first person to Check In to Win a brand new pair of skis from Rossignol. Congratulations, Jayne! 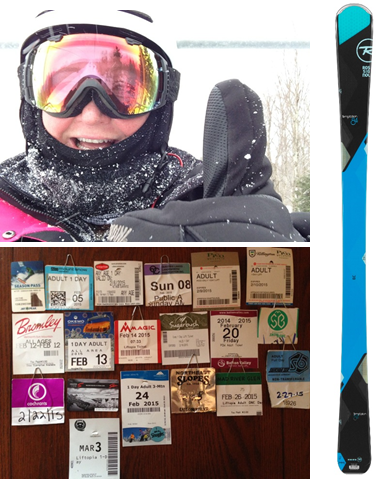 Jayne had a blast touring Vermont’s 19 resorts and has the lift tickets to prove she’s earned her new Rossi skis.

Jayne Johnson is from Milford, New Hampshire, and discovered the competition while browsing skivermont.com early in the fall in anticipation of another epic winter in the Northeast. At that time she had no idea just how awesome this ski season would be.

“I learned about the competition and a new ski app I had never heard about. It sounded like a fun new kind of adventure. We usually go skiing out west at least once a winter, but it dawned on me that I had never skied all there was to ski right here in my own backyard. I started plotting right then and there where the Vermont ski resorts were on a map, which ones I could ski on back-to-back days and how I could go about getting to all of them. I downloaded the Trace Snow app and learned about all the medals they award for doing things like skiing before 9am, skiing more than a mile or getting more than 20K vertical in a day — I was hooked on the idea!”

Thus her journey began. Jayne utilized a combination of ticket deals she found online, on resort websites and by taking advantage of mid-week specials. She cashed in a certificate that Sugarbush gave her at a Warren Miller film showing and bought a discount card available from the Children’s Hospital at Dartmouth, which also goes to a good cause. She even visited the Boston Ski and Snowboard Expo in November to make a few discounted purchases and snagged some coupons to make it more affordable to ski at so many resorts. Take it from Jayne, “if you plan well, it really can be done for less than you’d think.”

Jayne is also a member of a ski club and was able to coordinate club trips to check off a few resorts on her list. She started her adventure at Jay Peak where she also used the Trace Snow app for the first time. Jayne describes her experience with the app: “I saw how much more information this app gave me over the other apps I had used. I even earned a few medals that first day! I checked out Trace Snow’s website where my new ski stats were compiled and found it to be really easy to use and understand.”

Earning medals and seeing stats after each day on the hill motivated Jayne and she quickly started challenging herself to “ski longer to get my 10K or 20K vertical medal, get earlier starts to get my Early Bird medal and ski more to get my 2, 5, 10, 15 and 19 resorts visited medals. It was just so darn fun to see the stats on the Trace Snow website, too. I never before had information on how long I was on the chair lifts, how long I was actually skiing, getting ‘airtime’ from my little jumps, or my sustained and average speeds.” She admits, however, that there was one medal that wasn’t hard to earn this winter, “Trace Snow’s penguin medals because I was out skiing when it was below 0 degrees!”

The biggest reward for Jayne this season was visiting new ski areas for the first time, many of which were smaller areas that offer a local, hometown vibe. She told us “I was especially looking forward to seeing and skiing Quechee Ski Area, Bromley Mountain, Magic Mountain, Middlebury College Snow Bowl, Cochran’s, Northeast Slopes and Suicide Six.

For her grand prize, a brand new pair of Rossignol skis, Jayne chose the 2016 Temptation 84 (pictured above) with bindings to match. “They’re going to be next year’s model and I’m so excited to get them!” Jayne’s waiting on delivery in the next few weeks and hopes to take out her new skis for the first time at Killington Resort or Jay Peak Resort before the season ends.

Jayne tells the story of her epic Vermont adventure in the words and images below:

After getting in my first ski day at Jay Peak in January, I started my tour in southern Vermont, skiing Mount Snow Resort and Stratton Resort on February 5th and 6th. It was during one the early snowstorms, so I had amazing ski conditions at both resorts. I visited Quechee Ski Area on February 8th, Pico on the 9th and Killington on the 10th. The top of Pico was shut down due to weather because it was really windy and it seemed to be snowing horizontally that day. The next day at Killington it was still chilly, but with perfectly bluebird skies and almost no wind. 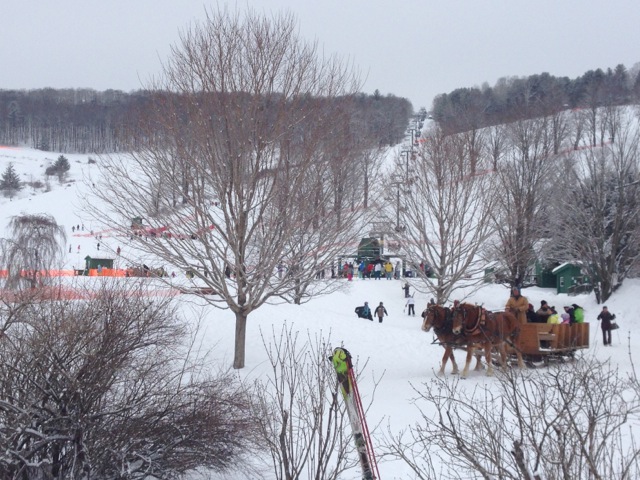 A horse-drawn sleigh transports skiers and snowboarders to the lift line at Quechee Ski Area. 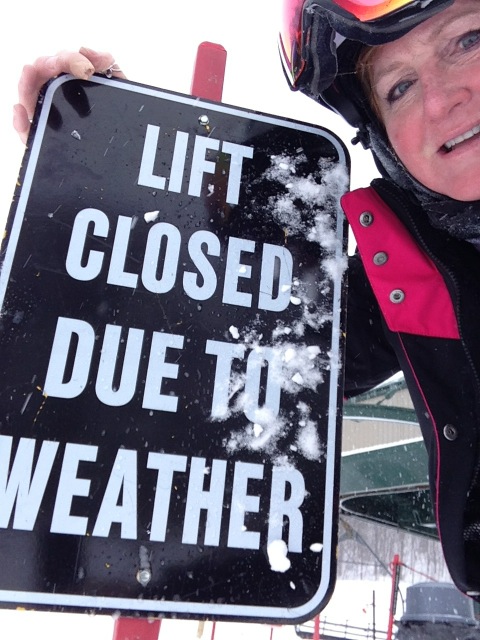 Facing all kinds of weather at Pico on Feb 9th

I continued north in Vermont, skiing at Bromley Mountain Resort on February 12th, Okemo Mountain Resort on Friday the 13th and Magic Mountain on the 15th. Bromley was the friendliest place skied at during my journey. I talked with more fun and friendly people on the lifts and in the lodge there than anywhere else and they all absolutely loved their home mountain. It was a nice day of skiing with really fun trails. I  fell in love with the iconic Red Chair double lift at Magic Mountain. Magic Mountain probably had the best conditions of anywhere I skied all of February, and they had some of the most interesting trails as well. It was cold during February - negative 3 degrees that day but I think I was getting used to the cold by then! 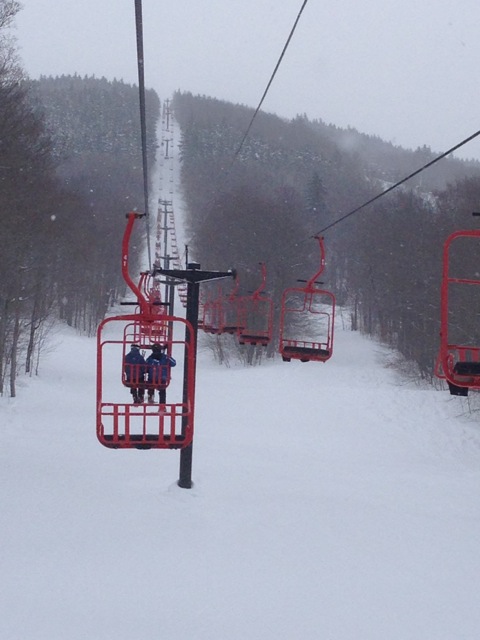 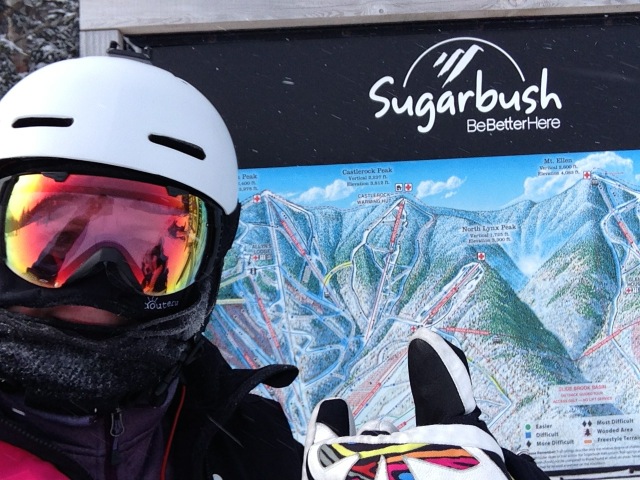 Skiing at Sugarbush with temps hovering around -7 degrees. I am smiling behind all that fleece! 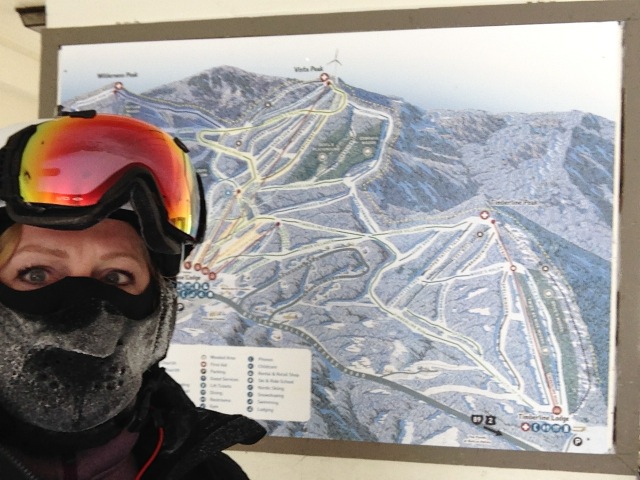 Skiing in a blizzard at Bolton Valley 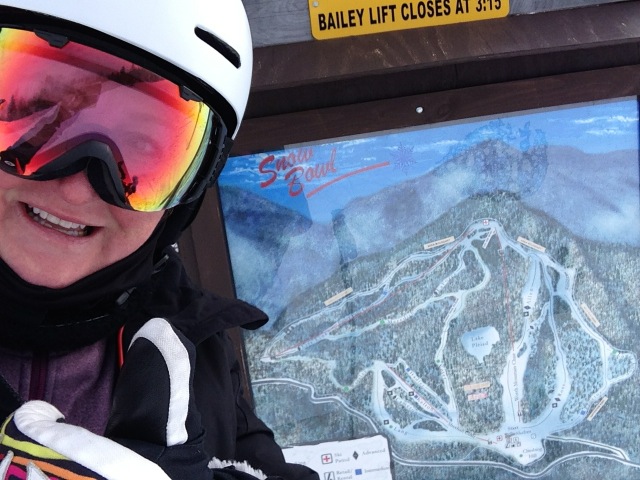 I continued on February 22nd (my 4th ski day in a row) with a trip to Cochran’s Ski Area. It had been a long time since I had taken a turn at a tow rope or a T-bar and it was impressive to stand in line with 5 and 6 year olds who put my skills to shame as they zipped up hill! Cochran's is a fun slope with a rich past and I was happy to have supported a small local ski hill. 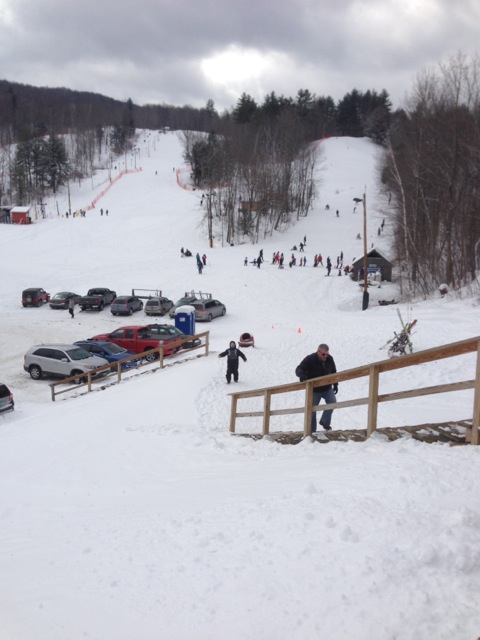 The trails at Cochran’s are a great place to learn.

The next stop on my journey was Stowe Mountain Resort and with another day of foul weather - low visibility due to high winds and blowing snow - I only skied a partial day. It was my 5th day in a row skiing and my legs were happy to have a rest. My 6th day that week was at Smugglers’ Notch Resort and I was happy to take my time getting there after waking up to another negative degree day. This was the only day that my phone and my Trace Snow app froze up and it only recorded about an hour’s worth the skiing I got in that day out of the 3 fun hours I was out in the great conditions. 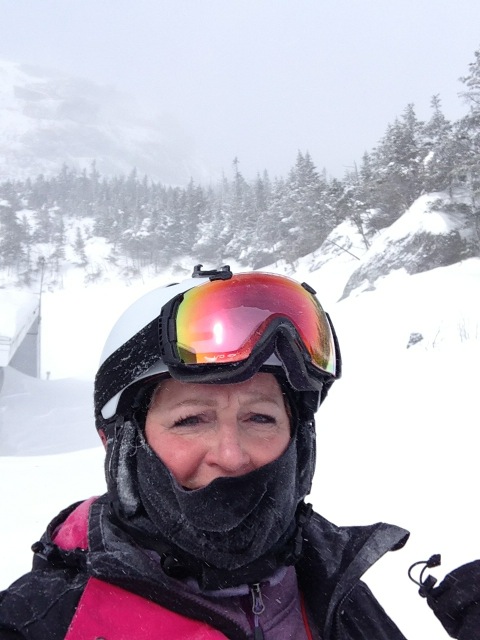 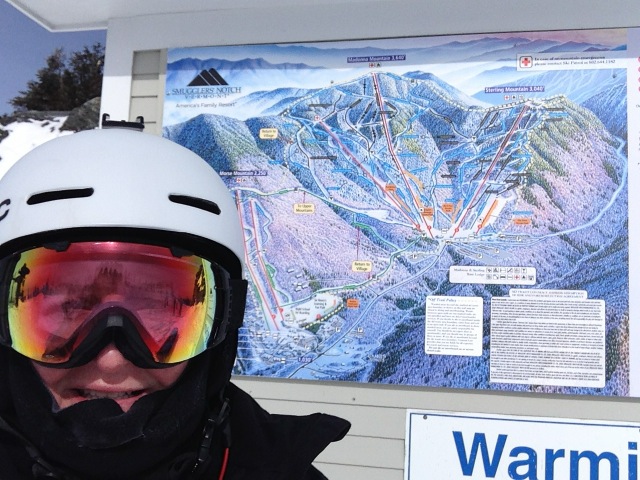 -30 degree wind chills on the top of Smugglers’ Notch resort but the conditions were great! 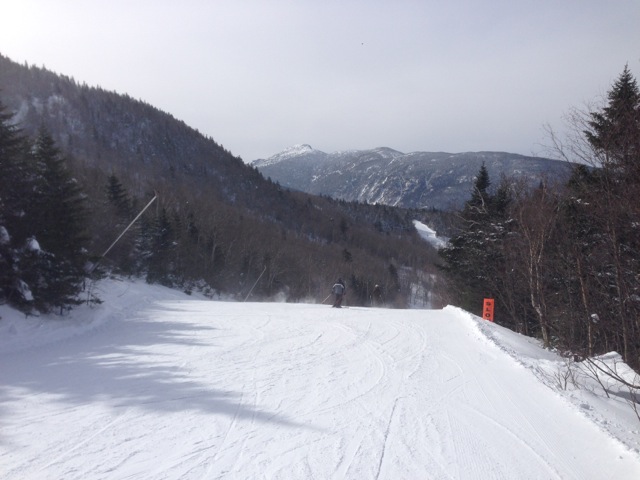 The next day was my 7th day skiing in a row and I was ready for something just a little bit easier, so I planned a day at Northeast Slopes. I didn't realize I'd be riding tow ropes and T-bars again! At least this time I was much better rehearsed at how to ride them and it was well worth the effort. The terrain here was really fun and there were about 5 inches of fresh snow that day. All the folks that work there are volunteers and are astoundingly friendly. I listened to their stories about the history of the ski area for about 45 minutes and wanted to hear more, but the sun was shining for the first time in a few days and I had to get out and enjoy the powder.  I learned Northeast Slopes has the fastest tow rope in the world. 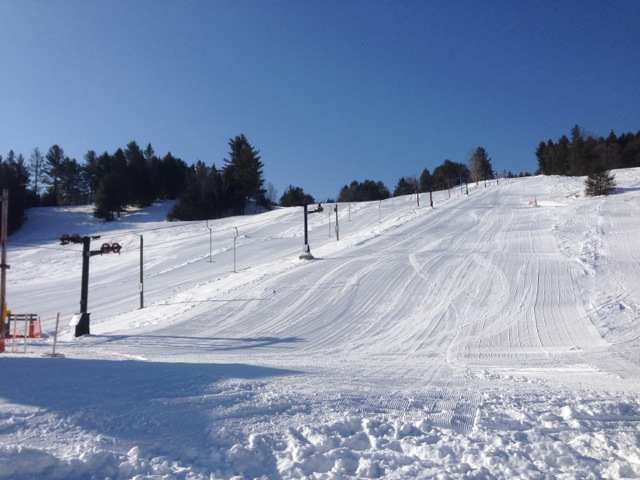 I continued on to my 8th day of skiing in a row with a trip to Mad River Glen on February 26th. This isn't the best location for tired legs but I love skiing there and I had a really nice day on the challenging trails. It had snowed again overnight and the trails were fun and lively. The next day I went to Suicide Six where I enjoyed one of the warmest and brightest days of the month. I had a fun time there, finding some really challenging terrain and beautiful views. 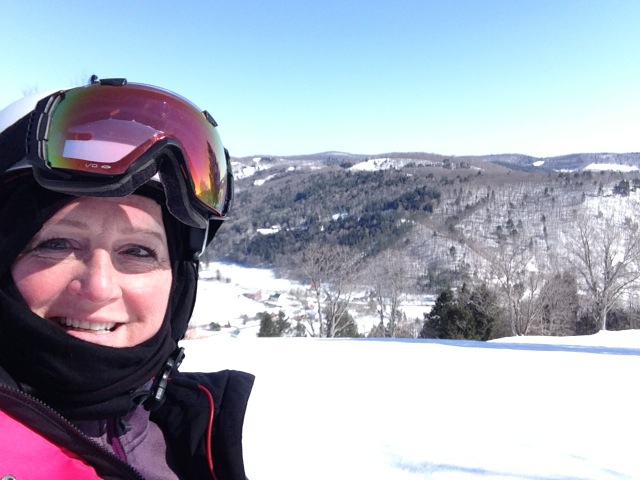 Skiing my 8th day in a row at Suicide Six on a beautiful, bluebird morning with some fresh snow and stunning scenery

By legs were screaming after that one, as I had now been to 18 Vermont ski areas, with 8 days in a row during this stretch. Time for a rest.

I planned to ski my final Vermont resort on my birthday, March 3rd, and drove up to Q Burke Mountain Resort to enjoy my last outing in the competition. It was bittersweet to be finished with my adventure, but I had a feeling of accomplishment and a better understanding of all the friendly, fun, exciting, diverse and amazing ski areas that Vermont holds in it's Green Mountains. I have always loved going to Vermont, but now I almost feel like a part of the landscape after traveling so many miles of highway and backroads and taking in the views from the tops of the ski areas. Making this journey was definitely time well spent. 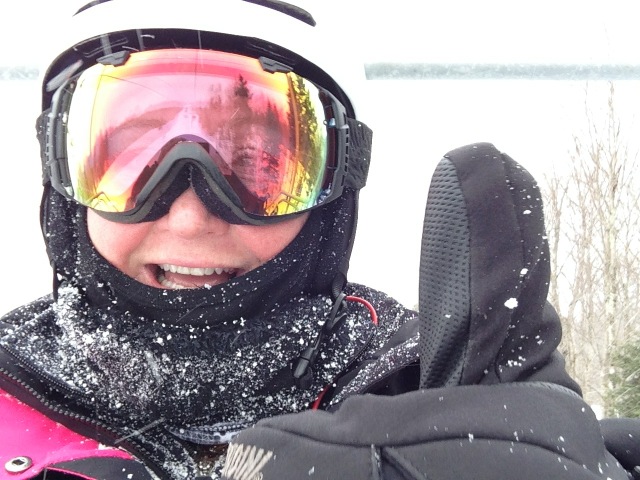 Cold, snowy and windy - but any day skiing is a good day!

Fun days, great skiing, cold weather, warm people - i was quite the adventure and I would recommend this challenge to anyone thinking about doing it ! It was a blast and I enjoyed seeing the great Green Mountain State from the top of every mountain.