Being a Vermonter means being tough, humble and no-nonsense. It means doing what you were born to do, and getting it done by whatever means necessary, with whatever means you have, without complaining. If anyone epitomizes the Vermont way of getting things done, it is the Cochran ski clan. The Cochran family boasts a rich history of top ranked US ski racers, and a humble yet cozy community ski hill in Richmond, Vermont that has been the center of their training for three generations. Today’s podium topping Cochran is of a different name, but cut from the same scrappy cloth.

Robby Kelley is the third ranked American slalom skier for the United States and a top prospect for the 2018 Olympics in Pyeongchang, South Korea. He is the youngest of the three kids born to and coached by Olympian and World Cup racer, Lindy Cochran Kelley, and the grandson of Mickey Cochran, the man behind the Cochran family legend who built a rope tow on the hill behind his house and trained his kids to become world class athletes. Mickey’s four children, Lindy, Marilyn, Barbara Ann and Bobby all raced with the US Ski Team and became Olympians in the late 1960’s and early 70’s. Of the following generation of grandchildren, six of ten competed on the US Ski Team. Robby, one of the most promising of the grandchildren, forged down another path adding to the unique Cochran’s family ski history. 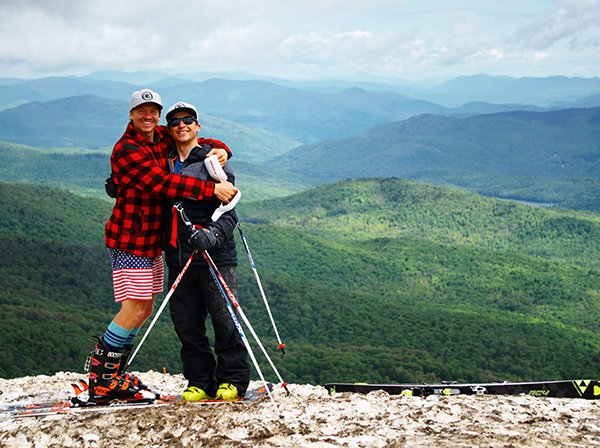 Robby and Tucker Marshall embrace the home mountains of Vermont.

It all started in the spring of 2014, when after 3 years on the US Ski Team, Robby didn’t qualify for a fourth. He and his brother Tim found themselves in their primes but not on the National Team, so along with friends Andrew McNealus and Tucker Marshall, they started Redneck Racing, an all-Vermont, self-funded, self-coached independent team with a clear mission: “Our goal as a group is to compete at the highest level of our sport and advocate for the pursuit of athletic achievements in a viable and effective way.” When asked what makes a Redneck racer, Robby replies: “A Redneck would be an independent free thinker who doesn’t let anyone tell them what they are or are not capable of…or something along those lines,” and later adds, “I definitely like the word scrappy, too.” 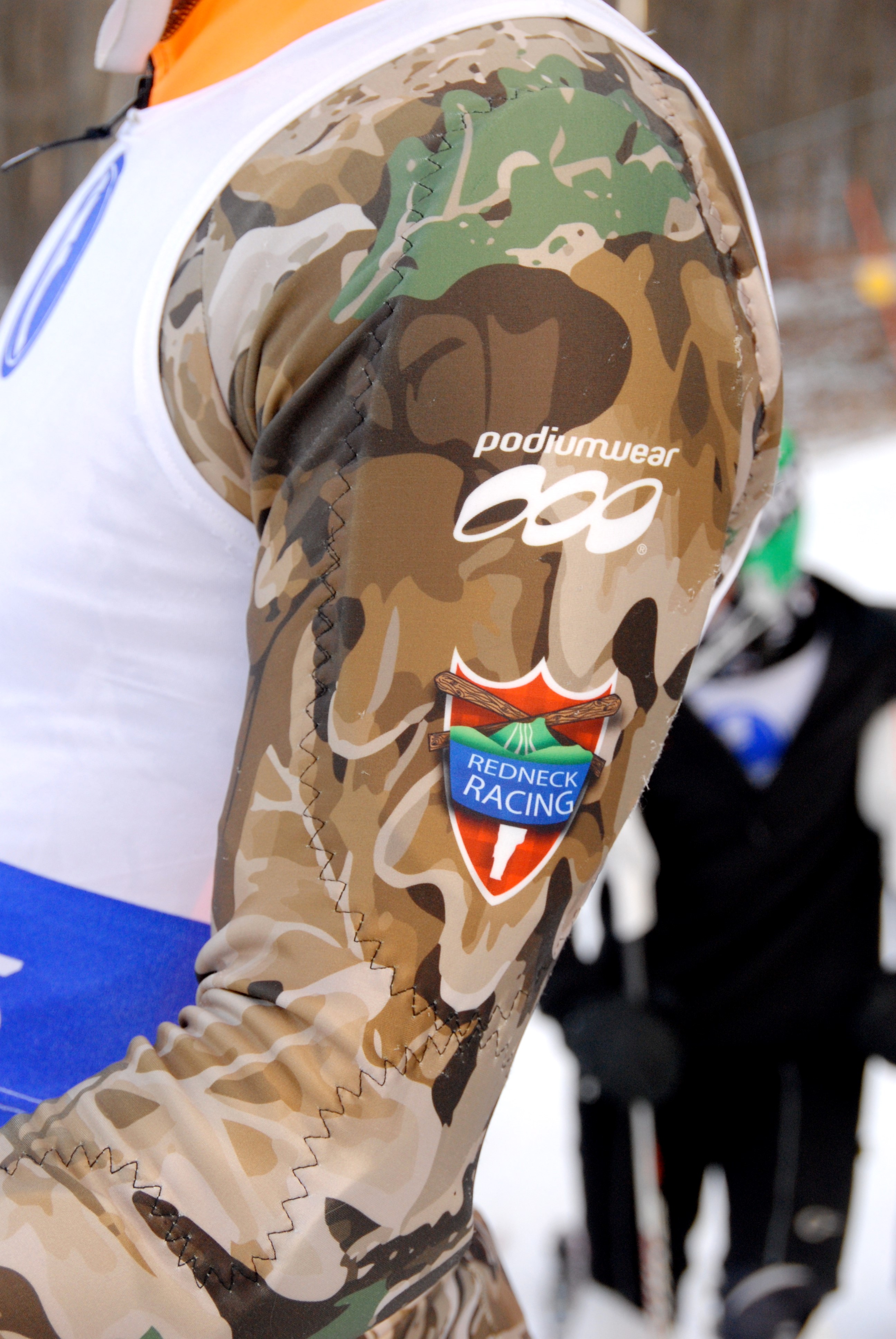 From the start, the Redneck Racing “uniforms” came in two colorways - denim/plaid and camo/blaze - and the Redneck ethos reflected the same Vermonter sensibilities synonymous with the Cochran name. “We had modest means, and did with what we had,” says Lindy, Robby’s mother, who explains how the backyard tow allowed her father to utilize his expertise in both engineering and coaching. “We were never into the glamour.” Robby, Tim and the other Redneck racers emulated the Cochran sensibilities and eventually, the Redneck way of maximizing limited resources, traveling on a shoestring budget, coaching each other and documenting adventures in a humorous way earned the respect and recognition of the ski racing community. After a successful ski season as independents, both Robby and Tim were nominated to the US Ski Team. Tim accepted the offer. Robby, in a highly unusual move, turned his spot down and committed to pursuing the ski racing dream the Vermont way - independently.

The following season, after earning a World Cup starting position as a Redneck Racer, Robby once again turned down the US Ski Team nomination - and the coaching, and technical and logistical support that comes with it - to stick to his Redneck ways. “This year I wasn’t asked and I assume it’s because they know I like being independent,” says Robby. “I was with the US Ski Team three years and have done it on my own three years. I like this better. I have more freedom for sure, and I spend less money.”

Along the way, he’s re-scripted the life of a World Class professional athlete. “I’ve gotten pretty good at the art of traveling as cheap as possible over the last couple years,” said Robby. “I always get the smallest rental car (even if it means a convertible in the dead of winter), never bring a duffle bag and carry my clothes around in a rain jacket.” His favorite shoestring travel story is when Tim’s carry-on bag exceeded size limits at the Auckland, New Zealand airport. Rather than paying to check it, Tim took out and put on his GS suit and helmet. “He was about to put his boots on before they finally let him go through security,” recalls Robby.

“You need to be a unique person to do it that way,” says Robby’ mother, Lindy, with a note of wonderment. “Robby is unique.” In addition to being adamant about his needs, she describes him as “entrepreneurial, artistic and able to go on the fly.” Reflecting on her own time as a ski racer Lindy, admits, “I totally relied on the ski team. I couldn’t do it the way he does.”

All in the family. Robby Kelley with mom, Lindy, and cousin Ryan Cochran-Seigle.

The Redneck way is as tenacious as it is frugal, which Robby proved last season at the World Cup night slalom in Schladming, Austria. Under the lights, in front of 60,000 roaring fans, a mere four gates from the best result of his life, disaster struck. In an eye-blink Robby was upended, skidding past the final gates to the side of the finish. The collective gasp—of a crowd primed for the triumph of the underdog—was followed by silence. And then, as Robby reflexively sprinted back up the hill to finish his run (a college ski racer move all but unheard of amongst the World Cup elite) the crowd erupted with approval. In Schladming as elsewhere, the scrappy Vermonter way bridged national and team borders and Robby became a crowd favorite amongst a nationally diverse audience.

Part of what drives Robby’s independence and tenacity is his appreciation of his home state. “I like being in Vermont as much as possible and setting up my own camps.” To prove how much he could do right at home, Robby closed out his 2017 season with an all Vermont spring training tour. The tour kicked off in early April with an annual rite of spring, the all-ages Sugar Slalom at Stowe Mountain Resort. Robby is an ambassador for Stowe’s Mount Mansfield Ski Club (MMSC), training with them in the off-season and during breaks in the World Cup schedule. It’s not unusual for him to show up at Stowe midseason, in his Patriots jersey, and thrill junior racers by forerunning their race. The Cochran clan turns out in force for the Sugar Slalom, helping on the hill and boiling up Cochran’s own Slopeside Maple Syrup to pour over troughs of snow for a Vermont delicacy, Sugar on Snow. Meanwhile Robby and his cousin Ryan Cochran-Siegle, a current US Ski Team member, sign autographs between ripping some fast race runs. 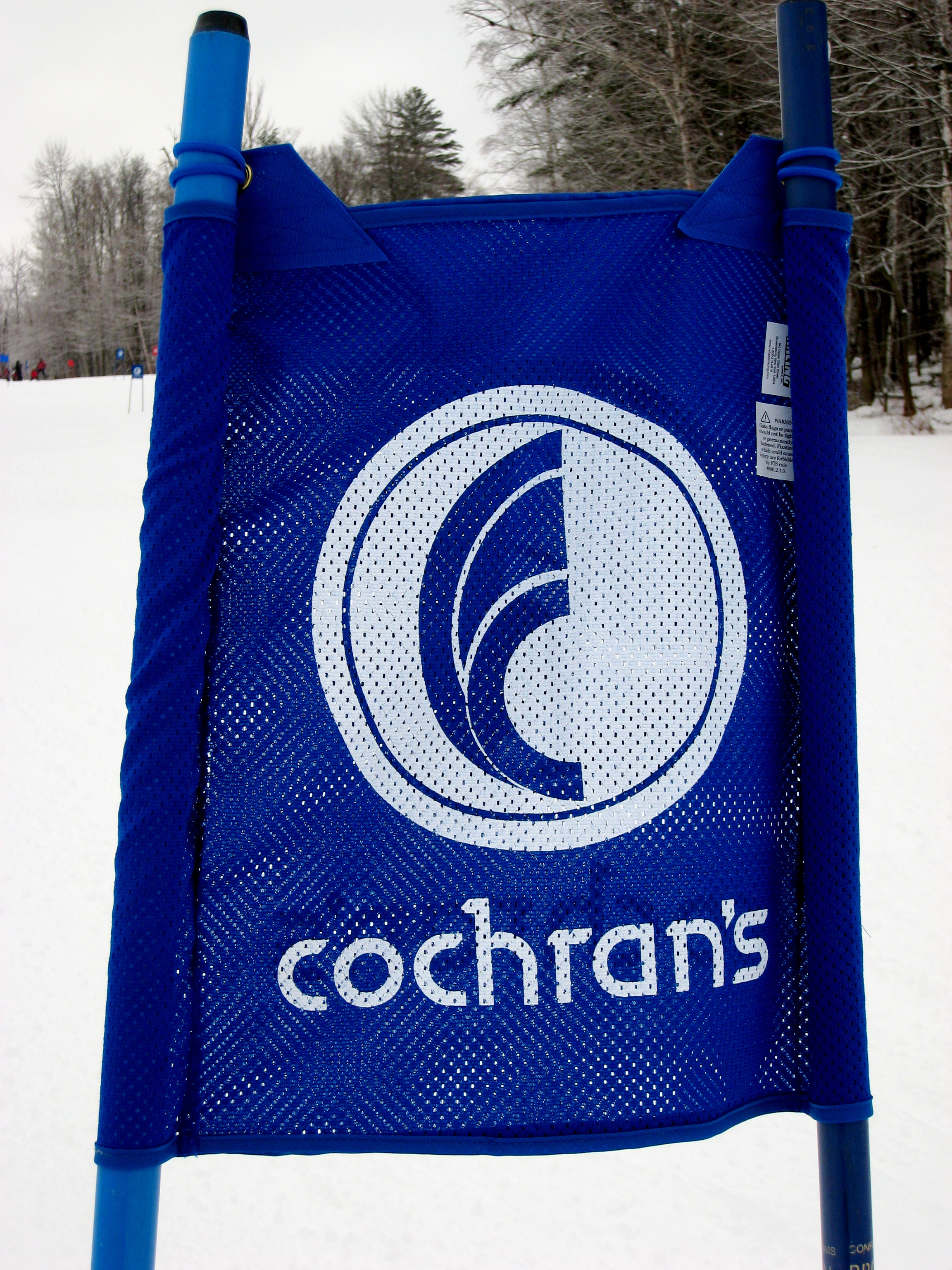 Through mid-April Robby kept his slalom legs fresh on the 350 vertical-foot “Cochran’s Glacier.” The Cochran Ski Area of today boasts a total of four trails served by a T-bar and a rope tow, state of the art snowmaking and lights. Its mission is to “provide affordable skiing and race training to kids and families” and continue to act as a training ground for the elite Cochran family racers. On any given winter day, you might find Robby, his four-year-old nephew Charlie, a college kid and a Masters racer all training…together. Robby rounded out his Cochran’s training at the annual spring TGFS (Thank God For Snowmaking) races and celebration in April.

Looking to add variety in his practice, Robby continued his spring tour by hiking to enticing snow patches throughout Vermont and setting up unlikely and insanely challenging slalom courses. His fun, fast company for these adventures included cousin Ryan Cochran-Siegle, former Redneck teammate Andrew McNealus and current Redneck Teammate Tucker Marshall. To wrap it up, Robby and Tucker headed south and took full advantage of the longest season in the East at Killington Resort and the free lift tickets on Closing Day, June 1. After ripping off slalom turns through the spring bumps Robby gave his assessment of the race hill: “A little bumpy, a little dirty but I think it should be good to go for the girls by November,” referencing the Women’s FIS World Cup races scheduled at Killington November 25 - 26, 2017.

When the last of Vermont’s snow had melted, the Redneck Racers appealed to the global ski racing community, offering coaching and high-level pace in exchange for summer training. For Robby that included a trip to France with Stowe’s MMSC in June and a trip to Norway in July with a group of British ski racers. As one of the world’s top slalom skiers, Robby’s challenge is to find pace with faster skiers and for that, nothing beats race training with them. Every August he treks to Australia or New Zealand for international races and to see where he stands on the world stage. In between travel to race train, Robby pumps iron and sweats it out at Cochran’s lush “Field of Excellence” (a playful nod at the US Ski Team’s $24 million Center of Excellence training facility).

Robby may embrace his fierce independence, but he is also extremely grateful and quick to say that he is not alone, even as an independent racer. In addition to the financial, logistical and emotional support of friends, fans, sponsors and MMSC, he is also welcomed by Vermont’s nearby premier ski academies Green Mountain Valley School (Sugarbush) and Burke Mountain Academy. “Everyone has been very supportive of me since I’ve been racing for Redneck Racing, even the US Ski Team,” said Robby. “They’ve been very helpful and supportive during the World Cup season.” Once the World Cup season starts in the fall, Robby folds back in with the US Ski Team on the World Cup circuit. 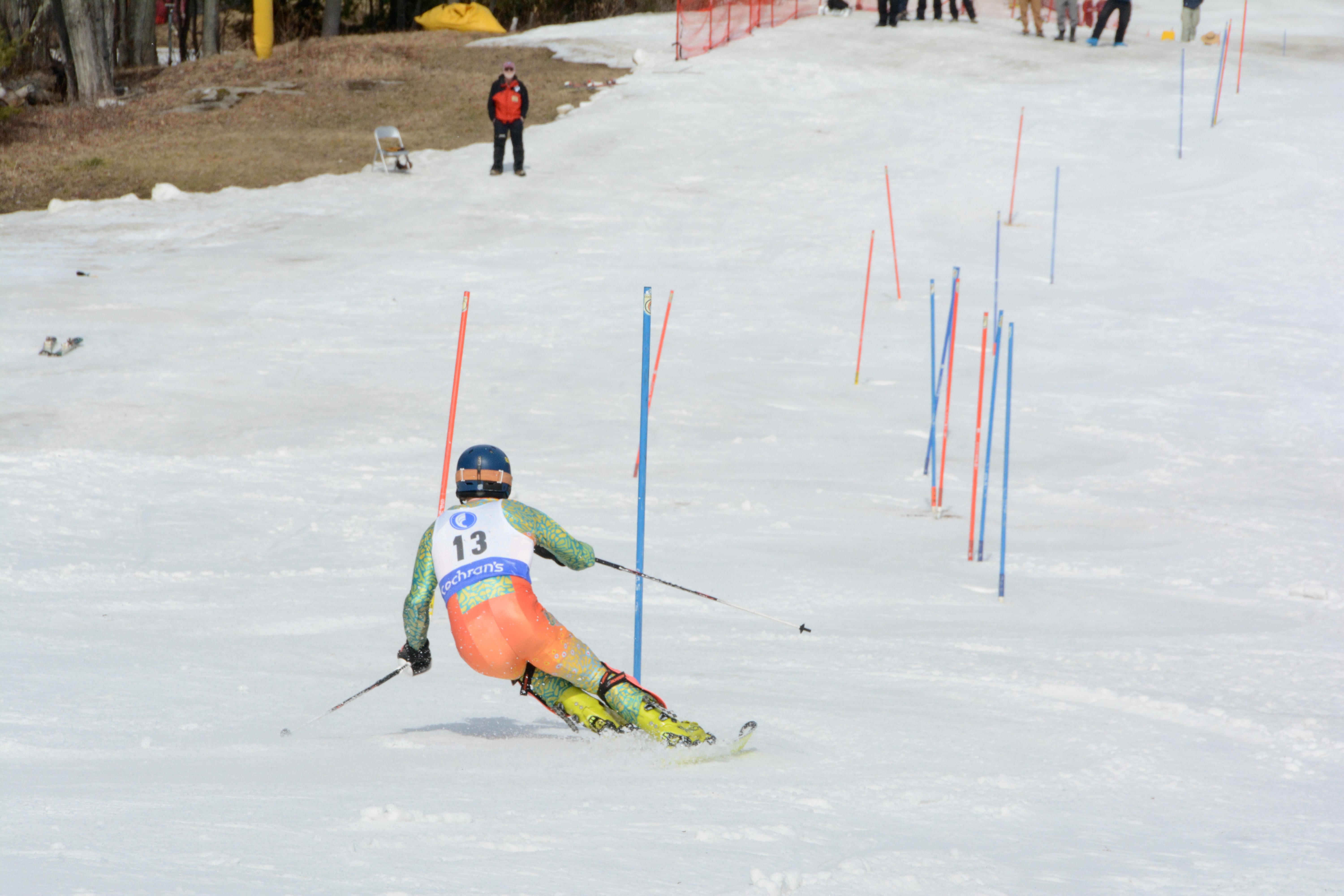 Then it’s pedal to the medals, and the race to Pyeongchang. “It’s always an honor to make the World Championships or Olympic team,” said Robby’s mom, Lindy. Robby will be aiming for one of the two top spots for his event which would guarantee a start at the games “That’s how you want to make it,” said Lindy. We’ll be watching for his signature style—complete with red flannel, camo and serious scrap— to get him there.

Follow Robby and Redneck Racing’s journey on social media @snooprobbyrobby and wherever else you see fast, scrappy skiers dressed in flannel and driving cheap rental cars.