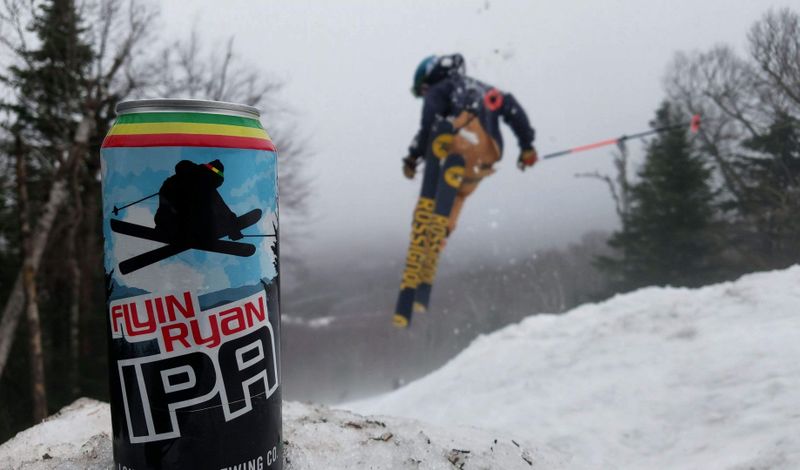 After a fun day on the slopes of a Vermont ski area, nothing beats cracking one of the state's world-class microbrews. (Ski Vermont photo) 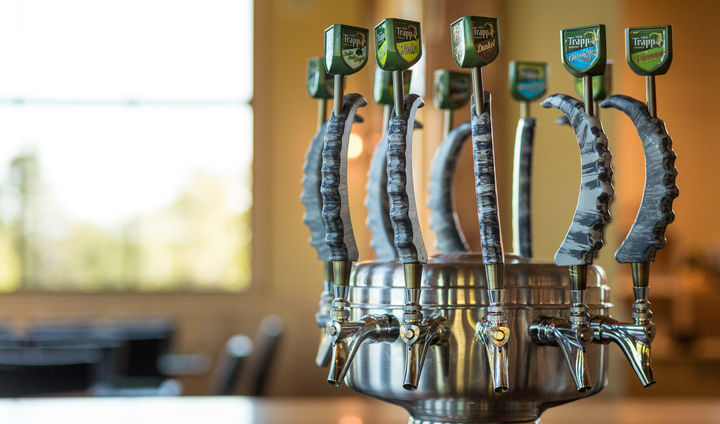 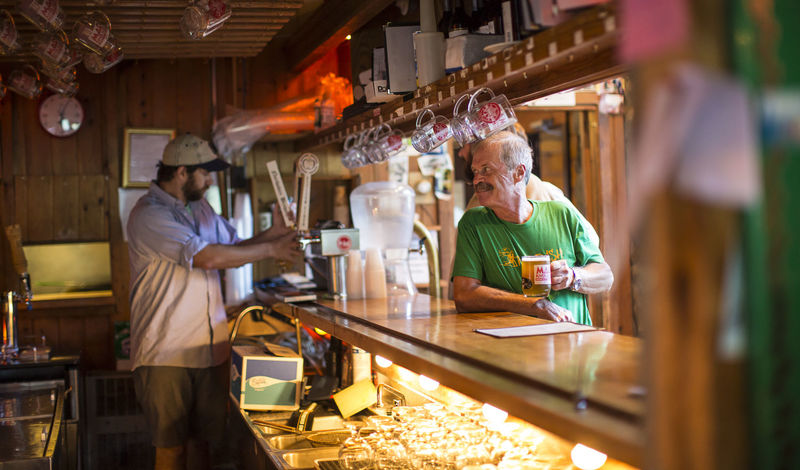 General Stark's Pub at Mad River Glen has been nationally recognized as one of the top apres-ski spots in the country. (Photo courtesy Mad River Glen) 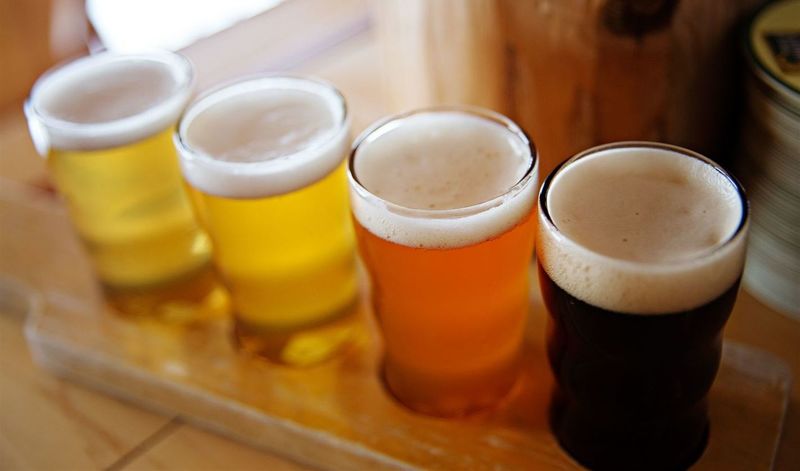 Vermont is as well known for its microbrew beers as it is for its top-notch skiing and snowboarding. (Ski Vermont photo)

When it comes to beer, Vermont’s aprés ski scene has traveled a great distance. As a Bostonian spending winter weekends in Vermont in the ’90s, I recall saddling up to the bar at Mad River Glen after a ski day to sip down one of two early adopters of Vermont craft beer. The full-flavored Long Trail Ale in its brown glass bottle, and the playful hints of spice and fruit in Magic Hat #9, were decidedly different from the market-dominating national brands familiar to me. I knew little to nothing about beer, but recognized these craft beers offered a vastly superior experience that could truly crown a day of skiing.

Nowadays, Vermont craft beer has exploded, with breweries and tasting rooms (66 and counting) occupying significant real estate in and near our ski towns. The choices of beer to consume after a day of skiing are mind-boggling, both at the mountain and in their neighboring breweries. This past winter, I made a pilgrimage to a handful of Vermont ski towns, pairing a day on the snow with an afternoon in the beer hall. Here is the lowdown on what I found:

When I think of Killington Resort, I think of late spring skiing and the Women’s World Cup. On a recent visit there on a midweek spring day, my gal-pal Barrie and I sought out sunshine and corn snow, and a few World Cup laps of our own. An introductory ride in the new, ultra-quiet gondola cabins of the K-1 Gondola allowed us to plan our path over to Bear Mountain, rumored to have the softest turns. Our journey took us on a lovely, meandering Bear Cub which toured us around the far edge of the resort to the Bear Mountain Quad. Sunshine-filled rides to the top allowed us to sample Outer Limits, and then settle on Skyeburst and Wildfire, two soft and slushy trails that yielded long, curving repeat runs of hero turns. Spring conditions can make you feel you are a better skier than you actually are, so our egos sent us forth to Superstar, the site of the Women’s World Cup races in November. The soft, deep, man-made snow conditions were thankfully far different than what Mikaela Shiffrin raced on her way to the podium las year (more of that coming in 2019 and 2020). And while Mikaela’s gaze was likely on the race gates, ours was on the spectacular views of the surrounding mountains.

Within 20 minutes of Killington’s base area is Long Trail Brewing Company, Vermont’s craft brewing pioneer. Originally called Mountain Brewers, Long Trail has been making craft beer since 1989. We sat down at a sunny picnic table in a window overlooking the Ottauquechee River, and placed ourselves in the hands of Ray, our friendly veteran server. Ray brought us several tasting flights so we could sample everything on tap, including favorites Long Trail Ale; Vermont IPA; Double Bag; and Limbo. Long Trail is also celebrated in the ski community for brewing Flyin Ryan IPA, a beer that donates back to the Flyin Ryan Foundation, supporting young athletes who embrace the ideals of its namesake. To accompany our tasting, Ray brought a plate of Lavash crackers, made with the beer’s spent grains. And in short order, a pair of heaping Bacon, Egg, and Cheese Kale Salads and a plate of Jumbo Chicken Wings arrived. Was it the sunshine, the rushing river, the after-glow of skiing, or the headiness from our beers that created this pleasant afternoon? Regardless, it was a recipe to be repeated.

A cold Monday in late winter offered an inch of fresh snow and virtually no lines at Stowe Mountain Resort. Skiing with a fast-paced posse of doctors in town for a conference, my companion John and I made long laps on Perry Merrill and Gondolier via the gondola before venturing over to the Fourrunner Quad. Though the Fourrunner exposed us to the winter elements, it paid off with intermittent snow stashes on Liftline, National, and Starr. The erratic weather that gave us morning sunshine and mid-day clouds settled on snow, and dropped a pristine white blanket atop Perry Merrill and Gondolier for our last, prized runs. As our group de-booted for an afternoon of medical presentations, we prepped for aprés, round two.

The Trapp Family Lodge Bierhall is a 10-minute drive into Moscow Valley, where the afternoon sun capped wide-open views of the 2500-acre property which offers cross country and backcountry skiing and snowshoe trails. We ordered several beer flights to try the seven beer varieties the Trapps are brewing in their squeaky-clean brewery. Most of the samples transported us to Austria—the dark Dunkel with the Munich malt; and the lighter Vienna, Helles, and Pilsner—while the Resilience IPA, brewed in collaboration with Sierra Nevada to support those affected by the California Camp Fires, tasted more like a full-bodied Vermont craft beer. The Austrian style sausages and local cheeses paired nicely with the beer, and the shaved radish our adorable Von Trapp host insisted we try was downright surprising.

Though the Alchemist Brewery was founded in Waterbury, they recently opened this high-octane brewery and visitor center in Stowe in 2016. Widely known for its award-winning Heady Topper, an IPA with 8 percent alcohol, the brewery pours complimentary beer samples, and sells beer four-packs and attitude-heavy T-shirts and hats to take away. You can’t actually drink a full beer here (due to Vermont’s liquor laws) but you can have several healthy pours of what’s on draft. The afternoon we visited, we tasted Focal Banger and Alena, both nice IPA-style beers with 7+ percent alcohol.

We returned to the Trapp Family Lodge the next day to sample their vast trail network. Our venture to the Cabin — a warming hut with a stoked fire serving soups and snacks — via Sugar Road, Yerrick’s Yodel, and the Cabin Trail, gave my rusty skate-skiing technique a vigorous uphill awakening. After a restful chat with several other Cabin mates, our mostly downhill route back to the touring center along Haul Road offered a relaxed conclusion to our ski. A few hours on these trails and you’ve truly earned your aprés.

Another midweek spring day rewarded John and me with sunshine and a few inches of fresh snow at Jay Peak Resort. We began on the Aerial Tram, chatting with the pleasant operator as we glided to the 4,000 foot peak. Despite the several benches available I soon realized that sitters are losers on this tram as the views, visible only from a standing position, were remarkable in all directions: To the west, we could see Lake Champlain and the Adirondacks; to the north, Lake Memphremagog; to the east, New Hampshire’s Presidential Range; and to the south, Camel’s Hump. From the top, we enjoyed several sun-filled groomed runs on Vermonter and Montrealer, though the real pay-off came in the Stateside area off the Jet Triple, on Jet and Haynes, two top-to-bottom expert runs with forgiving moguls.

Riding our spring-skiing buzz, we hopped in our car and headed 20 minute north to Kingdom Brewery in Newport. Kingdom Brewery is fairly remote and decidedly unpretentious, a warehouse building on the outside, that once indoors, feels like walking into your neighbor’s kitchen. Tina, the cheerful plaid-shirted bartender, was gliding to and fro behind the bar, carrying on conversations with customers, including the owner’s mother perched on a barstool. Tina guided us through the diffuse list of beers on tap, scrawled in colored chalk on a blackboard behind the bar, including: Tucker IPA; Hipster Kingdom Raspberry Espresso Milkshake IPA, Billy Goat IIPA, Bear Mountain Toasted Coconut Milkshake Stout, and Granny’s Apple Pie. Since many of the beers are high in alcohol and have distinct flavors, a tasting size is perfect. Once indoctrinated, my second round was a full pour of the Tucker IPA, served in a glass cowboy boot. For insight into owners Brian and Jenn Cook, look no further than their two-sided business card, whose front lists Brian as “owner and brewmaster”, and whose back lists Jenn as “head brewer” with the slogan “making the beer my husband gets credit for.”

Sugarbush Resort and Mad River Glen have been my neighborhood mountains since 2003, when I moved my family to the Mad River Valley. I feel at home in the Vermont vernacular style of Sugarbush’s Lincoln Peak, whose base area is punctuated with barns, farmhouses, a silo, and a cow (not live). I like the food-truck-style options around the courtyard that offer a perfect latte (with foam design), as well as a crepe monsieur. I like the views that reach across Lake Champlain to the Adirondacks from atop the Heaven’s Gate Triple and Mt. Ellen’s Summit Quad on a clear day. And I have many favorite runs, including crowd-pleasers SnowBall and Spring Fling, and adrenaline-driving FIS at Mt. Ellen. This season, however, I fell in love with Stein’s Run. First, in early season when natural snow blanketed Stein’s, giving way to a long, steep and glorious ski. Then, as the season progressed, I found a line on Stein’s beneath the low-energy snow guns that delivered what felt like my own private snow storm. Again. And again.

If Sugarbush is clean Vermont style, then Mad River Glen is the down and dirty version. The base lodge is original, since 1948, and while the famed single chair was replaced in recent years, it was done to precisely replicate its predecessor. Details do not go unnoticed here, from the hip music playing in the base area and at mid-station, to the bar’s forward-looking beer list, to the sign out front whose message changes with the mountain’s mood. Many regulars here prefer skiing in the trees, but my best runs are on piste.  While Antelope and Canyon are two of my favorites, Liftline could be the best in the East, for its bad-ass narrow vertical juxtaposed with its public scrutiny under the single. I have two stand-out memories this season—in late November, when the snow kept falling, and Liftline was empty of skiers yet full of snow. And midseason, on a powder day, when my friend Isabel and I eyed a fairly barren Liftline from the trees and gave it a try. Score.

Along with his wife Karen, Mad River Glen naturalist Sean Lawson opened Lawson’s Finest Liquids Brewery and Taproom in Waitsfield in 2018. Made famous for its Sip of Sunshine IPA in the yellow can, Lawson’s welcomes you inside through glass doors splashed with a carved-wooden sunshine. The glorious post-and-beam-style Taproom is broken up into cozy spaces—a game nook behind the fireplace where kids often play, a u-shaped bar where locals claim their stool, community picnic tables, and a retail space. Lawson’s pours around twelve beers of their creation, and while I struggle to get beyond the ultra-satisfying Sip of Sunshine, many other beers are worthy of becoming favorites, including Sugarhouse IPA, The Space in Between, Double Sunshine IPA, and Chinooker’d IPA. Local charcuterie, cheeses and pretzels are available as appetizers, and live music plays on select Mondays.

There are currently more breweries per person in Vermont than in any other state in the country. Vermont beer is in a sweet spot, and is quickly becoming an industry that is as integral to its residents and visitors as skiing. So what does all this mean to fellow skiers and riders? There is no better place to seek out your idyllic ski day — whether that includes downhill challenge, show-stopping views, or historic ambiance — and then top it off with a couple of cold beers, than in Vermont.

Candice White is a communications consultant and writer who lives in Waitsfield.