"Who Says We Don't?" African-American Ski Club Talks Love of Skiing and Need for Diversity on the Slopes 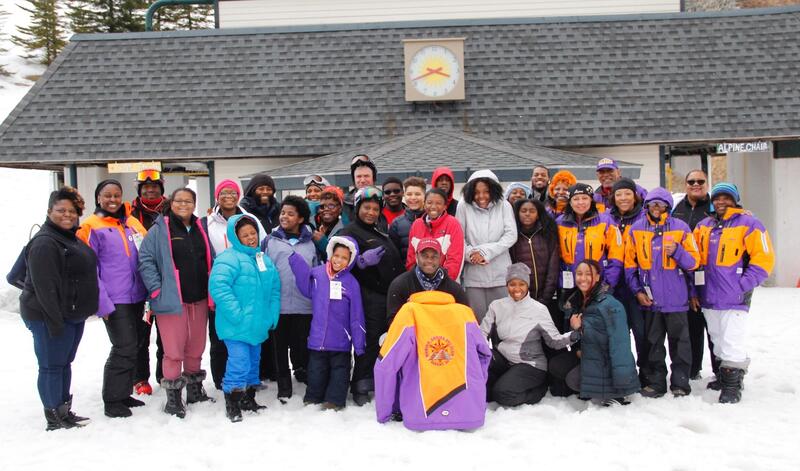 Members of the Nubian Empire Ski Club out of Albany, N.Y., pose for a group photo during at outing at Bromley Mountain on March 31, 2019. (Photo by Rob England) 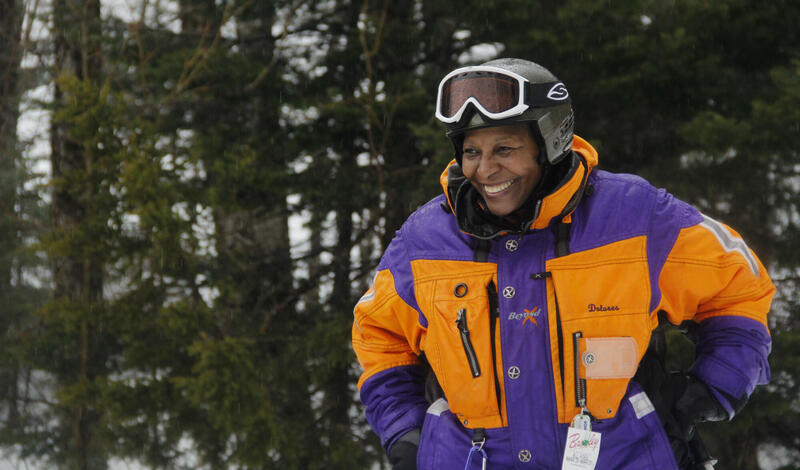 Smiles were in abundance as the Nubian Empire Ski Club out of Albany, N.Y., enjoyed an outing to Bromley Mountain on March 31, 2019. (Photo by Rob England) 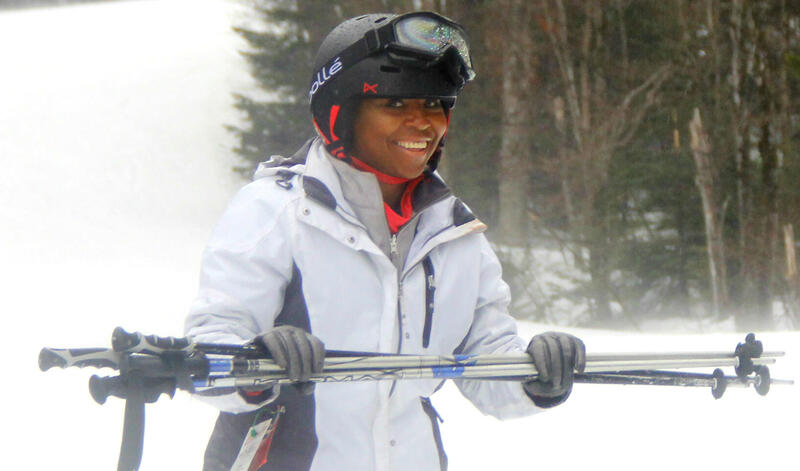 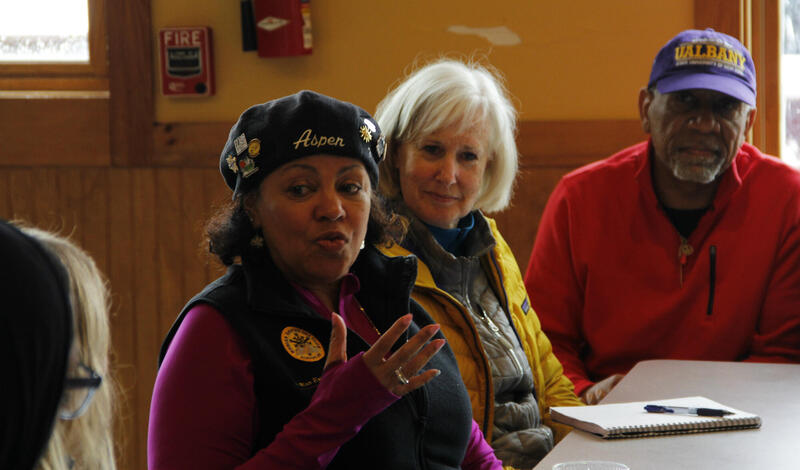 March 31, 2019 was a rare day on which “The Sun Mountain,” Bromley, was missing its signature solar splendor. Rain fell steadily and the slopes were socked in by a thick blanket of fog.

The weather wasn’t enough to dampen the spirits of the Nubian Empire Ski Club, visiting from Albany, N.Y. More than 30 members of the African-American ski club braved the elements to log lap after lap on Bromely’s trails, from beginners in a group lesson on Lower Boulevard to experts hammering through moguls off the Blue Ribbon Quad.

Despite Mother Nature’s best efforts to rain on their parade, the Nubians – as the club members refer to themselves – felt right at home.

“Most of us learned to ski - and really honed our skills – here in Vermont,” said Peggie Allen, a founding member of the NESC and current president of its parent organization, the National Brotherhood of Skiers. “I did a three-day learn to ski package up here a number of years ago, and by the end of the third day I was like, ‘this is it.’”

While those numbers seemingly reinforce some painful stereotypes about skiing being a whitewashed sport, the NESC regards Vermont as a comfortable and inviting place to enjoy the sport they love.

“Vermont has always been a welcoming place for me to ski, and I’ve been coming here for a long time,” said longtime club member Jim McKamey. “I don’t think anybody has ever made me feel like I shouldn’t be here.”

That doesn’t mean there isn’t room for improvement, however. At the conclusion of their sublime-but-soggy ski day at Bromley, Allen and McKamey – along with NESC president Omoye Cooper and several other club members – sat down with representatives from Ski Vermont as well as Bromley and other member ski areas for a roundtable discussion about how to improve diversity in the industry.

Several club members acknowledged that the very first hurdles occur within the African-American community itself. Skiing has long been viewed as a “white sport” from both within and without.

“Stereotypes die very hard, and it’s not just white people,” Cooper said, recalling when a black ski patroller named Phil Littlejohn first suggested she try skiing. “I’m like, ‘are you crazy? Black people don’t ski.’ That’s what came out of my mouth. It took a lot to get me out there.”

Club member Clarisse Banks had trouble getting her own spouse to warm up to the idea.

“When I first met my husband he was like, ‘you will never, ever, ever, ever see me on skis,’” Banks said. “Now he skis more than I do; he’s been to Mount Snow and Stratton without me. Once you get bit by that bug you really can’t stop.”

One of the club’s younger members, Kimarley Johnson, said he acts as a sort of ambassador for the sport in the face of the stigma that “black people don’t ski.”

“In high school and in college, I tell people that I ski and at first they don’t believe it,” Johnson said, “but they have a different opinion once I tell them all the mountains I’ve been to and how much fun it is.”

Sadly, those looks are nothing new.

“You hate to say it, but I think we’re all kind of used to it,” Allen said. “Being a black person in America today, you’re used to a lot of looks – whether it’s at TJ Maxx or on the mountain. We kind of live with that every single day.”

Allen said some of the most tangible moments of discomfort come on the chairlift.

“You can tell when you get on the chairlift with somebody who feels really uncomfortable,” Allen said. “They’re sitting there (stiffly), looking straight ahead and not saying anything.

“It’s hard, especially in the current political climate. There are people who sit in silence on the chairlift because they don’t know what to say and they don’t have that comfort level. They don’t know how to ask, ‘what’s going on here?’ without feeling as though they’re being disrespectful in some way.”

The NESC members said another obstacle in removing the stigma about race and skiing is the prevalence of only white faces in ski resorts’ advertising and online presence.

“If we’re talking about increasing diversity in the industry, I think it’s about how you make the different groups aware of and familiar with the sport. I think it starts with other people who look like them doing it,” Cooper said.

Banks took her family to Smugglers’ Notch Resort for Christmas one season and has since noticed African-American models in follow-up correspondence.

“Now whenever we get materials from them, we keep seeing faces of people who look like us,” Banks said. “Then when I share it with my friends, it’s not like we were the only ones there. Being able to see yourself means a lot.”

“It’s important that when you go to a ski area website, it’s not just showing white people – it’s showing blacks and Asians and Puerto Ricans,” Allen said. “Otherwise, it makes it look like it’s exclusive, when you open up a brochure or magazine and it’s only showing a bunch of white people doing it. That makes us say, ‘that’s just something that white folks do.’ It is so important to have that familiar face.”

“In instances where I have been at a mountain and I haven’t felt comfortable – where I experienced some slights – it wasn’t with the other skiers. It was the staff,” Cooper said. “I think another part of the outreach is to work with mountain staff to make sure they’re open to, and accepting of, diversity.”

NESC member Jill Hayes said diversity within the resort staff itself is also important – provided it is not limited to only entry-level jobs.

“The few resorts that I’ve gone to where there is staff of color, they always seem to be in certain positions - the maintenance, the housekeeping,” Hayes said. “You may see a lift attendant or a ski patroller, but you rarely seen them in administrative jobs such as sales.”

The ski industry’s struggles with staffing are well documented. Kelsey King, interactive marketing manager at Mount Snow Resort, raised the question of how Vermont – a state with such little population diversity and issues with affordable housing and cost of living – could more effectively attract people of color to work at its ski areas. Banks responded with the idea of reaching out directly to African-American communities through their cultural events and organizations.

“If the population is not here, you’re going to have to go to the place where it is,” Banks said. “It might mean you need to go into these communities during the summer.”

The point was then made that resorts may not be comfortable making those inroads, thinking their efforts might be perceived as gratuitous or even invasive.

“In the beginning you’re going to have to get uncomfortable to understand: Every black face around this table, we live our lives uncomfortably,” Banks responded. “In this world, that’s just the reality of being black in America. We’re used to being uncomfortable.

“The resorts need to understand that to make change, you might need to get uncomfortable.”

The question of whether purposeful inclusion of African-American models in advertising could be seen by members of the black community as forced or disingenuous was met with a similar response.

“It’s only gratuitous if I follow up and go to the mountain and I’m not treated like a regular customer,” Banks said, “or if I go there and the only people who look like me are the ones cleaning up or serving food in the cafeteria.”

As the roundtable concluded, people on both sides of the conversation said it was enlightening and that they hoped such dialog could continue. Allen – who said it was the first time she had ever been asked by anyone in the industry to sit down and talk about diversity – ended up delivering a keynote address on the topic at Ski Vermont’s Annual Meeting in June.

McKamey walked out of the Bromley base lodge wearing a broad smile and marveling at skiing’s power to unite.

“America is supposed to be a melting pot,” McKamey said. “Let’s stir it all up, because everybody is the same.”

On the web:
Check out this excellent video from REI about the formation and history of the National Brotherhood of Skiers: https://bit.ly/2Ywj3bt