Keepers of the Flake: Snowmaking and Grooming at Vermont Ski Areas 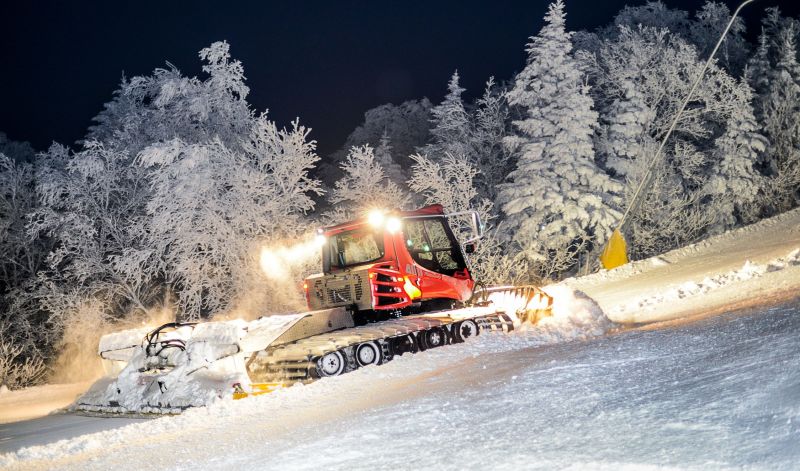 If you want to know what makes Vermont skiing and snowboarding truly special, you don’t need to look too deep; it’s the snow. Legendary natural accumulations are supplemented with some of the very best snowmaking systems in the business, and expert mountain operations teams across the state have turned grooming and surface maintenance into an art form.

Whether you’re in search of the ultimate untracked experience or carving up pristine corduroy, Vermont’s ski resorts work night-and-day to deliver the best possible surfaces on which to leave your mark.

Mount Snow Resort
Snowmaking improvements continue to be a priority at Mount Snow, as two more trails will be added to the Northeast’s most powerful snowmaking system, increasing snowmaking coverage to 83%. On the Sunbrook Face, we’ve added 7.2 acres of snowmaking to Little Dipper, and this change will allow us to open this trail earlier in the season and keep it consistently covered throughout the winter. In Carinthia, we’ve added snowmaking to Fool’s Gold, which would increase snowmaking coverage by an additional 9.8 acres and allow us to transform it into a park with small features. These projects wouldn’t be possible without the previous upgrades of the past three summers which totaled more than $30 million invested in snowmaking.

Killington Resort
The Longest Season in the East is made, not born. If snowmaking is the heart of The Beast, the Mountain Operations Team is the backbone of the whole operation. To compliment Mother Nature’s average of 250 inches of natural snow each winter, Killington Resort’s snowmaking system covers 600 of our skiable acres. When conditions are at their best, in an hour’s time, Killington’s snowmaking system pumps more than 720,000 gallons of water to 240 snow guns, covering 80 acres with 12 inches of fresh snow. The snowmaking system features 88 miles of pipe, 1,700 snow guns (including more than 1,100 Low Energy guns), and a virtually endless supply of water to produce machine-made snow. www.killington.com

Magic Mountain
It’s been said Magic doesn’t make any snow or groom trails. Some myths die hard. But under new ownership, Magic has consistently expanded its capacity to make snow from 25% of its trails to over 50% of trails on both East and West Sides. Magic’s commitment to improved snowmaking quality included the purchase of over 70 HKD energy-efficient guns laying down better snow and our groomers creating beautifully fun corduroy conditions so Magic always offers a variety of man-made and natural snow trails. And, with less skier traffic, the quality of the snow last longer throughout the day.

Suicide Six Ski Area
Full snowmaking automation of “The Face,” the mountain’s signature trail, will allow for higher quality snow and shorter production times. This season snow making at Suicide Six will occur earlier in the season thanks to TechnoAlpin and our talented in-house team, who designed the concept. Reallocation of existing resources will further increase snow quality, as well as play a major role in helping Suicide Six open earlier for the season.

Sugarbush Resort
Sugarbush believes that snowmaking can make a real difference in getting terrain open with better conditions, sooner, and as such offers snowmaking on 70% of its terrain. But it purposely reserves the other 30% of terrain for natural snow conditions to enjoy those powder filled days on bumps, narrows, and steeps. Thanks to the purchase of low-energy snow guns including Snow Logic, HKD, and Ratnik snowguns over the last decade, Sugarbush has seen energy savings of close to 20%, while being able to make more, better quality snow in less time. The resort has also increased the percentage of trails it typically grooms on any given day, especially on weekends, and now includes favorites like Stein’s Run and The Cliffs into the rotation.

Smugglers’ Notch Resort
With a fleet comprised of 100% high efficiency/low energy snow guns, Smugglers’ is well-known for high-quality surface conditions. Capacity currently sits at 62 percent and is expected to grow over the coming years thanks to the recent addition of a water intake pipeline which runs from the Resort down to the nearby Lamoille River. For the 2018-19 season, Smugglers’ Notch Ski Patrol received the prestigious Best Small Alpine Patrol award from the National Ski Patrol. This award is given to the team most noteworthy based on a long list of criteria. Smugglers’ Patrol wears this badge of honor with great pride!

Jay Peak Resort
Jay Peak’s request for 516” of natural snow for the 2019-2020 season was recently approved by the MNRB. The biggest storm is tentatively scheduled for the week of March 16, 2020 with the last flake of the season falling on April 21st.

Stratton Mountain Resort
This season, Stratton adds 12,500 feet of new snowmaking pipe with the latest hydrant technology for flexibility. Throughout the season, snowmakers optimize snow quality and energy efficiency with a state-of-the-art control system.  From opening to closing, Stratton offers the “great snow guarantee” thanks to over 1,200 snowguns plus unrivaled air and water capacity with 220 million gallons in reserve.  A Prinoth Leitwolf joins the grooming fleet this season,  boasting a Mercedes Tier 4 Diesel engine that produces 530 horsepower and a tiller that covers 15 feet in a single pass, dramatically increasing efficiency.  Grooming machines are monitored in real time by Prinoth’s fleet management system that also precisely measures snow depth through the satellite based “SnowHow” system, delivering a 15 percent increase in efficiency, 12 percent cost savings and 11 percent higher grooming performance.

Okemo Mountain Resort
Okemo consistently wins awards and accolades for its snow quality and surface conditions. Okemo’s reputation for lightning-fast recovery, especially when New England weather wreaks havoc, is renowned among eastern skiers and riders. Okemo covers 98 percent of its trails with snowmaking – that’s 1,300 energy-efficient HKD tower guns mountain-wide. Recent upgrades to Okemo’s water-pumping power allows the resort to move up to 9,000 gallons of water per minute through its snowmaking system. And ample amounts of water are ready to be turned into snow when the temperatures allow. Okemo’s primary snowmaking reservoir holds 155 million gallons of water. Okemo typically converts 350 to 450 million gallons of water into snow each winter season. Two snowmaking crews work 12-hour shifts so Okemo can make snow `round the clock when winter arrives. A fleet of state-of-the-art Prinoth grooming machines and a veteran team of operators work through the night to provide optimal surface conditions every day of the ski and snowboard season.

Stowe Mountain Resort
Stowe Mountain Resort’s state-of-the-art snowmaking operations possess a key component to making and maintaining some of the best groomed snow surfaces in the industry, people. The science of making snow is more fascinating than you think, that’s why Stowe produces this short film for to satisfy your curiosity. To see the acclaimed video about Stowe’s snowmaking please follow this link: https://www.youtube.com/watch?v=3xT6M1OnEpg

Mad River Glen
Snowmaking is the most obvious example of what separates Mad River Glen from the rest of the industry, as it is the last bastion of natural snow skiing in New England. As the industry changed over the years and became more reliant on snowmaking, Mad River’s lack of it helped to set the mountain apart. To date we operate 7 fan guns covering the lower third of the mountain, this helps us extend early and late season operations bringing the snow line down to our base elevation.

Bolton Valley Resort
Following on the heals for our early opening last November, Bolton Valley’s new ownership and leaderships is hyper focused on extending the ski and ride season as far as possible on both sides of the season with improved snow making capacity and operations. Bolton will start making snow as early as temperatures permit and in the early season especially, the focus is always on the trails that are lit for night skiing so guests can ski until 10pm as soon as possible.  With its brand new high-efficiency electric compressor, Bolton is now able to blow a lot more snow more efficiently for more of the year!  Considering that Bolton has snowmaking on 80% of its trails, this all means you’ll see more terrain open for more of the time at Bolton this year!

Pico Mountain
With the largest capital investment in 20 years for snowmaking improvements this year, skiers and riders at Pico can look forward to more consistent and more reliable snow surfaces this winter and for seasons to come.