Will Ferrell's "Downhill" Follows in Tracks of Great Ski Comedies 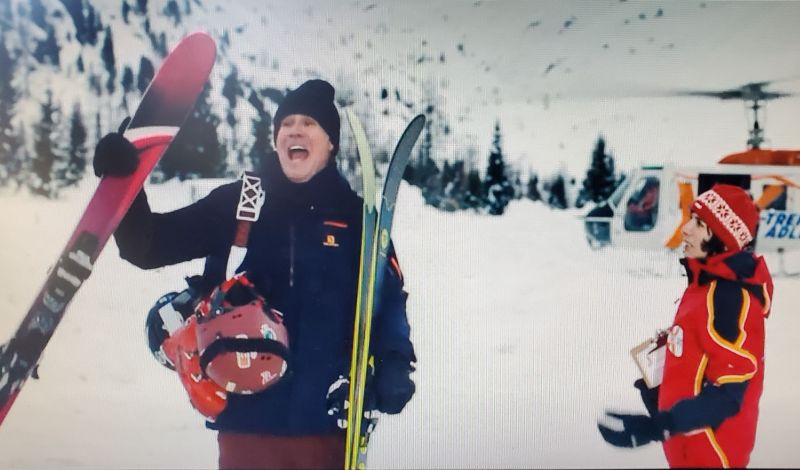 A screen grab from the trailer for "Downhill," starring Will Ferrell and scheduled to be released on Feb. 14.

Planning ahead for a Valentine's Day date with the skier or snowboarder in your life? Well, you're in luck: Will Ferrell's latest film, Downhill, opens on Feb. 14.

The film's plot centers around a family ski vacation to the Alps, where a brush with danger forces a married couple (Ferrell and Julia Louis-Dreyfus) to "reevaluate their lives and how they feel about each other." The trailer features some beautiful scenery and skiing shots, as well as some ski humor that should resonate as genuine with veterans of the sport (such as the struggle of trying to negotiate a bathroom stall when all geared up, and the eternal question of whether or not it's possible to run in ski boots).

While we look forward to Downhill's release, we thought it would be fun to revisit some of our other favorite movies from the ski and snowboard genre (fictional ones, rather than documentaries or stoke films).

"Hot Dog is one of the more iconic 1980’s ski movies. It’s raunchy humor and local vs. corporate outsider plot made it an instant classic. It’s a tale as old as time, with which any mountain local can identify. The film reinforces the simple fact that skiing with your friends is a blast. From the all-day-party atmosphere to playing follow the leader down the mountain, this movie gets me excited to go skiing without fail."

"Though this film is about a lot more than just skiing, Better Off Dead uses a mano-a-mano alpine ski race down the mythically steep and dangerous K-12 run as its ultimate showdown between protagonist Lane Meyer and his arch nemesis, Roy Stalin. BOD also earns points for its avoidance of the formulaic "hard-partying misfits" blueprint that other films in this genre - such as Ski School and Snowballing - ripped off from Animal House. And of course, there is the unforgettable ski bike pursuit from Johnny Gasparini, the world's scariest (and most determined) paper boy."

"The movie Out Cold is, at its core, a snowboarder movie. Especially if you have ever lived in a small town and worked at a no frills ski resort, you can relate to working hard while partying hard, honoring traditions of those who came before you and becoming bonded in a misfit group because of your shared passions. Is the moral of the Out Cold story to do what you love while staying true to yourself reading a bit too much into this humorous throwback flick? Maybe, but we will cheers to Papa Muntz anyway!"

We can't attest to this movie's quality because none of us have actually seen it, but this final installment of the animals-playing-sports franchise launched by Air Bud features a snowboarding chimpanzee named Jack. Stereotypical shenanigans shown in the trailer include riding a board down a staircase indoors, snatching the beanie off an inncocent bystander in mid-shred and a dreadlocked onlooker saying "whoah," a la Bill and Ted. Talk about bringing new meaning to the "knuckle dragger" put-down.

Ski chases are featured in numerous James Bond films, including The Spy Who Loved Me and For Your Eyes Only ... Inception is arguably the best movie ever to include a skiing scene ... Hot Tub Time Machine puts a new spin on the ski vacation hijinks plotline ... The Beatles engage in all sorts of on-ski zaniness during the Ticket To Ride scene in Help! ... Gregory Peck and Ingrid Bergman give serious credence to the idea that skiing is a sport for beautiful people in Alfred Hitchcock's Spellbound.

So, what is YOUR favorite ski or snowboard movie?